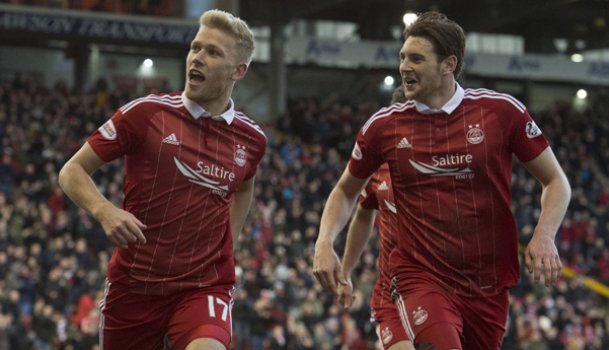 Aberdeen moved into second place in the Ladbrokes Premiership with a 2-0 win over Partick Thistle at Pittodrie on Saturday.

Aberdeen moved into second place in the Ladbrokes Premiership with a 2-0 win over Partick Thistle at Pittodrie on Saturday.

Substitutes Jayden Stockley and Ryan Christie got the goals for Derek McInnes' men in the last 18 minutes of the match.

Rangers were held to a 1-1 draw by Ross County at Ibrox - Alex Schalk gave the Staggies the lead but Lee Wallace equalised in 71 minutes.

Hearts earned a 3-0 win over Motherwell at Fir Park as they took advantage of a Carl McHugh red card. Alexandros Tziolis opened the scoring and Esmael Goncalves claimed a late double for Ian Cathro's men.

Bottom club Inverness CT hit back from two goals down to draw 2-2 with Dundee in the Highland capital. Marcus Haber and Darren O'Dea scored before the break but Billy McKay (penalty) and Greg Tansey replied.

Hamilton Accies and Kilmarnock drew 1-1 at the SuperSeal Stadium. Sean Longstaff gave Killie an early advantage but Eamonn Brophy came off the bench to equalise before half-time.