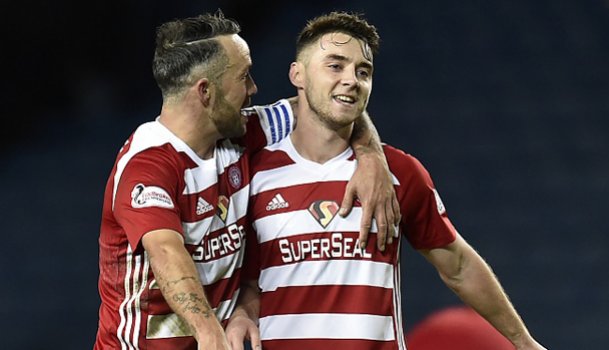 Hamilton Accies beat Rangers 2-0 at Ibrox on a good day for the away sides in the Ladbrokes Premiership on Saturday.

Hamilton Accies beat Rangers 2-0 at Ibrox on a good day for the away sides in the Ladbrokes Premiership on Saturday.

David Templeton and Darren Lyon got the goals as Martin Canning's men became the first Hamilton side to win a league game at Ibrox since 1926.

In the early game, a terrific free-kick from substitute Leigh Griffiths earned leaders Celtic a 1-0 win away to Ross County to extend their unbeaten domestic sequence to 64 matches.

Louis Moult scored both goals as Motherwell beat Aberdeen 2-0 at Pittodrie to go into next weekend's Betfred Cup final on a high.

St Johnstone ended their goal drought with a dramatic 2-1 victory over Hibernian at Easter Road. Murray Davidson's opener was cancelled out by Anthony Stokes' stoppage-time penalty but Steven MacLean grabbed the winner right at the end.

There was one game in Ladbrokes League 2 - Cowdenbeath remain at the foot of the table following a 1-1 draw with Annan Athletic at Central Park.