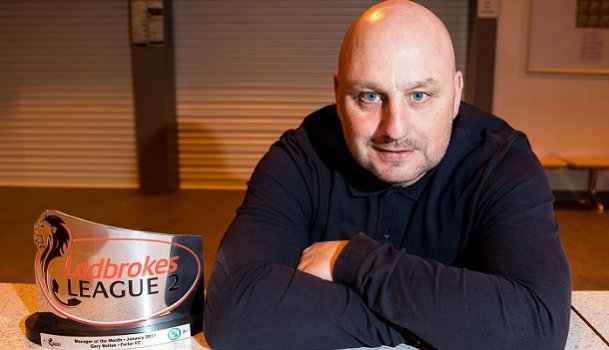 Gary Bollan has been voted Ladbrokes League 2 Manager of the Month for January after steering Forfar Athletic through the month undefeated.

Gary Bollan has been voted Ladbrokes League 2 Manager of the Month for January after steering Forfar Athletic through the month unbeaten.

The League 2 leaders defeated Annan Athletic, Edinburgh City and Cowdenbeath and drew with Elgin City and Stirling Albion and are on a nine-match unbeaten run, 11 points clear of second-placed Arbroath, as they prepare to welcome Elgin to Station Park on Saturday.

Bollan, who was also Manager of the Month in both August and September, told Ladbrokes News: “I’d be lying if I said it wasn’t nice to win this award multiple times this season but there’s a lot of hard work goes on in the background beyond me.

“I couldn’t do it on my own and it’s a whole effort by the club. Myself, the backroom team, the physios and the board of directors have put everything in place to help me build a quality squad and the volunteers at the club have been sensational.

“They put in so much work and effort behind the scenes and they raise a lot of the money that comes in and help us to budget for the season. We try and repay them by winning games.”