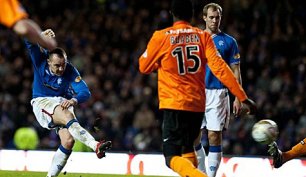 Boyd grabbed a first-half hat-trick in the space of nine minutes to equal the former Celtic's 158-goal haul and added two more late in the game to overtake the Swede at the top of the scoring charts.

Steven Whittaker and Madjid Bougherra were also on target for Walter Smith's side, who shrugged off the dismissal of Kenny Miller early in the second half to move seven points clear at the top of the Clydesdale Bank Premier League. Damien Casalinuovo netted United's only goal.

"To break Henrik Larsson's record in the manner he did was fantastic. The manner in which he scored the goals sums him up. Few can score the goals he does and he has improved a lot this season. He has accepted he has to do a bit more this season and it's not affected his goals."

Dundee United caretaker manager Peter Houston said: "We let our fans and ourselves down big time as no United team with the players we've got should lose to Rangers - or any other team - 7-1. I apologise to the fans but that is taking no credit away from Kris Boyd - he was sensational."