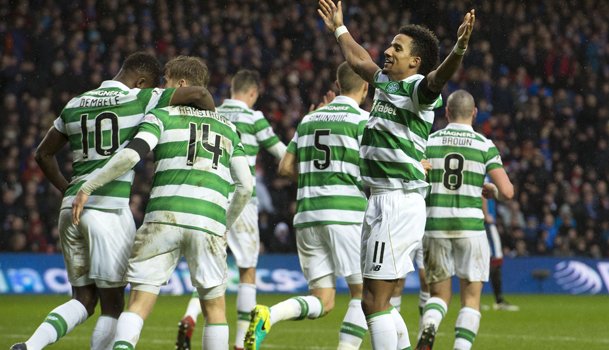 Celtic came from behind to beat Rangers 2-1 at Ibrox and move 19 points clear at the top of the Ladbrokes Premiership table.

Celtic came from behind to beat Rangers 2-1 at Ibrox and move 19 points clear at the top of the Ladbrokes Premiership table.

Kenny Miller gave Mark Warburton's men an early lead but Moussa Dembele lashed home an equaliser before the break and Scott Sinclair got the winner 20 minutes from time as Brendan Rodgers' side notched up their 15th Premiership victory in a row.

Ross County moved into the top six with a 3-2 win over bottom club Inverness CT in the Highland derby in Dingwall. Premiership top scorer Liam Boyce bagged a double for the Staggies and Martin Woods was also on target while Carl Tremarco and Alex Fisher netted for Caley Thistle.

Dundee beat St Johnstone 3-0 in the Tayside derby at Dens Park thanks to goals from Faissal El Bakhtaoui, Kostadin Gadzhalov and a Steven Anderson OG.

Louis Moult scored a stoppage-time equaliser as 10-man Motherwell earned a 1-1 draw with Hamilton Accies in the Lanarkshire derby. Alex D'Acol put the hosts ahead at the SuperSeal Stadium after Lee Lucas had been sent off but Moult had the final say.

Partick Thistle and Kilmarnock drew 0-0 at Firhill in the day’s other game.