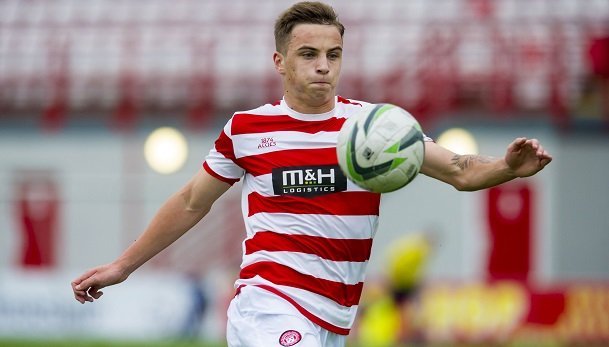 With the SPFL Development League campaign having reached the brief winter break, Hamilton Accies sit top of the 17-team division.

With the SPFL Development League campaign having reached the brief winter break, Hamilton Accies sit top of the 17-team division.

Frankie McAvoy’s side currently lead Aberdeen by three points with 13 wins from 16 games. The star man for Hamilton has been striker Eamonn Brophy (pictured) who, after scoring his fourth hat-trick of the sea-son, made it 16 league goals in 12 starts. Greg Docherty has also been instrumental in their success, netting seven league goals from midfield.

Sitting pretty in second spot are Aberdeen, where former Arbroath boss Paul Sheerin has a vast array of talent at his disposal. Pivotal has been Lawrence Shankland, the Development League’s top goalscorer.

Having bagged 17 goals prior to Christmas, it has been this rich vein of form that has seen the former Queen’s Park striker be rewarded with a contract extension at Pittodrie until 2017.

Scotland U19 captain Scott McKenna, along with striker Cammy Smith - who has scored seven goals - have also caught the eye, with the former also pledging his future to the club.

Kilmarnock, Falkirk and St Mirren are sitting third, fourth and fifth within a point of each other. Impressive performances have seen several Development League players make their first-team debuts this term.

St Mirren youth coach David Longwell - assisting interim boss Gary Teale - has included youngsters such as Jack Baird and Stephen Mallan - who scored his wonder goal against Dundee last weekend. Next to make the step up could be Lewis Morgan, a tricky winger who has impressed in several outings this season.

It has been Stephen Frail’s side who have arguably scored the goal of the season. Kieran Tierney - who is out for the remainder of the season with a broken leg - scored this wonder goal from the edge of his own area in a 3-1 win over Heart of Midlothian.

Rangers sit 10th but they too have games in hand. Striker Ryan Hardie has been crucial in their league campaign so far, scoring seven goals for the Ibrox outfit.

Across the country, the first Edinburgh derby of the season takes place early in the New Year. Hibernian are one point below Celtic but Hearts - often fielding a very young team - are third bottom.

Prior to their defeat to Hamilton, Joe McBride’s Hibs side went 12 games unbeaten - form that saw them temporarily rise to third place. Sam Stanton has netted eight goals as he looks to break into the first team again, while Lewis Allan and Jake Sinclair - the brother of Manchester City winger Scott Sinclair - have each contributed six.

Ross County and Inverness Caledonian Thistle sit bottom and second bottom respectively but a positive for the Staggies is the emergence of 20-year-old Tony Dingwall, who has now made seven first-team appearances.

For Caley Thistle, Calum Ferguson has had a big impact. Scoring almost half of the goals his team have scored, he and Ali Sutherland may be the next to progress to first-team level.