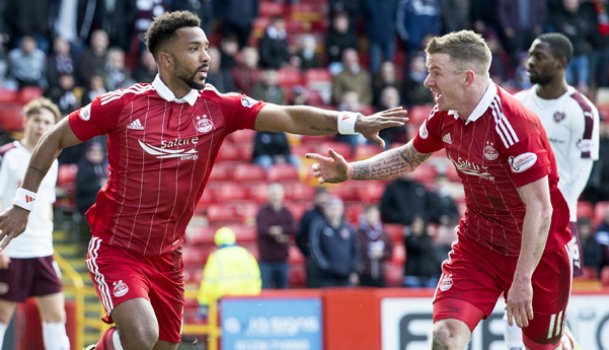 Aberdeen beat Heart of Midlothian 2-0 at Pittodrie in the early game in the Ladbrokes Premiership on Saturday.

Aberdeen beat Heart of Midlothian 2-0 at Pittodrie in the early game in the Ladbrokes Premiership on Saturday.

Goals in either half from Shay Logan and Jonny Hayes earned Derek McInnes' men, who had Jayden Stockley sent off at the end, a ninth straight home victory.

The result also means that leaders Celtic - who are away to Dundee on Sunday at 12.30pm - can't clinch the title until next month.

St Johnstone are up to fourth place after beating Motherwell 2-1 at Fir Park with a double from Liam Craig. Scott McDonald netted for Well.

Inverness CT are off the bottom on goal difference after a 1-1 draw in the Highland derby. Greg Tansey opened the scoring but Alex Schalk grabbed an 86th-minute equaliser for Ross County.