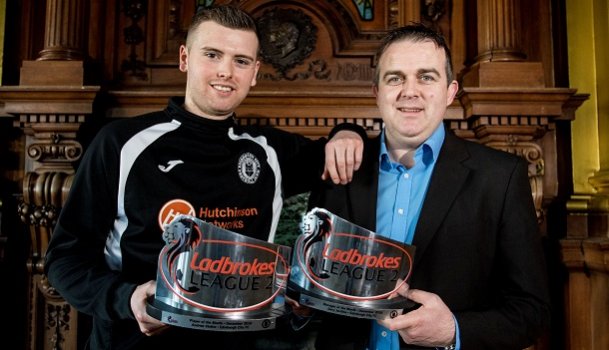 Edinburgh City boss Gary Jardine has been voted Ladbrokes League 2 Manager of the Month for the second month running.

Edinburgh City boss Gary Jardine has been voted Ladbrokes League 2 Manager of the Month for the second month running.

Jardine, who has been in charge since 2010, picked up the December accolade after steering the Meadowbank-based side through the month unbeaten.

Goalkeeper Andrew Stobie, who conceded just one goal in four matches, was voted Player of the Month as the Lowland League champions extended their undefeated run in Ladbrokes League 2 to eight matches. Edinburgh City beat Arbroath (1-0), Stirling Albion (2-0) and Berwick Rangers (3-1) as well as drawing 0-0 with Clyde

Stobie added: "I'm proud to be given the award - but I was a bit shocked. It's not often a goalkeeper gets a Player of the Month award. Given how well the team played, any of us could have won it. I'll certainly take it, though, and I'm very proud.

“Gary was the joint manager at first and I've been with him for nearly seven years. He's a good man manager, knows his players and always had confidence in us that we'd turn it around."