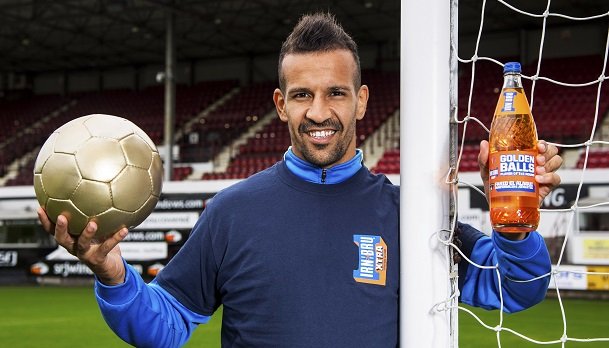 He may not have taken the match ball home but Dunfermline Athletic&rsquo;s cup hero, Farid El Alagui, has bagged the IRN-BRU Cup Golden Balls Award after scoring the most unconventional hat-trick in the competition so far.

He may not have taken the match ball home but Dunfermline Athletic’s cup hero, Farid El Alagui, has bagged the IRN-BRU Cup Golden Balls Award after scoring the most unconventional hat-trick in the competition so far.

The Pars striker showed no sign of stage fright when he came off the bench to score all three goals in the fourth-round tie against Queen’s Park – one of which was at the wrong end.

Despite skewing a header into his own net to set up a fraught finish in his side’s 2 -1 victory at East End Park, the Pars held their nerve to finish the job off and reach the quarter-finals.

The French-Moroccan striker’s ballsy performance on the pitch captured the imagination of supporters who voted for the super-sub to win the Golden Balls Award in a poll held on IRN-BRU’s official Twitter channel @IrnBruFootball.

The poll went down to the wire, with Farid coming out on top with 34% of the votes, beating St Mirren’s Stevie Mallan with 32%. Greg Draper of The New Saints and Alloa Athletic's Greig Spence both polled 17%.

On getting his hands on the IRN-BRU Cup Golden Balls Award, El Alagui said: “It’s always good to have a cup run and we were pleased with the win over Queen’s Park as it takes us one step closer to bringing a trophy back to East End Park.

“That was the first own goal I’ve scored in my career and the first time I’ve scored all three goals in a game too. I got a bit of stick from the lads after the game so I hope I can score another hat-trick in the next round but this time at the right end of the park! When you see the teams that are left in the cup I think we’ve got a great chance so hopefully we can manage to do that this season.”

Adrian Troy, Head of Marketing at IRN-BRU, said: “As the football sponsor with balls, IRN-BRU is recognised for doing things differently which is why we’re delighted to present the Golden Balls Award to Farid for giving new meaning to the idea of scoring a hat-trick and writing his name into the competition’s history books.”