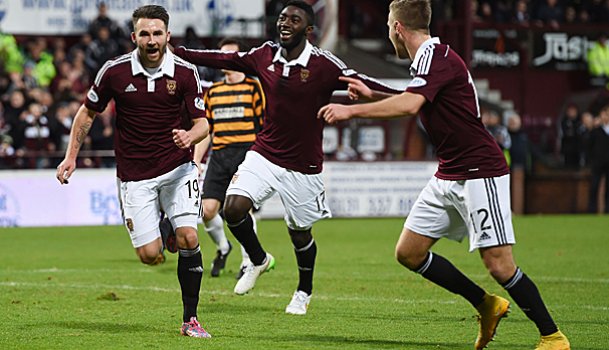 Hearts remain nine points clear at the top of the Championship following a 2-0 victory against Alloa at Tynecastle on Saturday.

Hearts remain nine points clear at the top of the Championship following a 2-0 victory against Alloa at Tynecastle on Saturday.

James Keatings and Callum Paterson struck in the first half as Robbie Neilson's men made it 16 league games without defeat ahead of Tuesday's trip to Cowdenbeath.

Hibernian are up to third place after coming from behind to beat Raith Rovers 3-1 at Stark's Park. Jason Cummings, Liam Fontaine and Dominique Malonga were on target after Barrie McKay had broken the deadlock.

Queen of the South slipped to fourth following Cowdenbeath's 2-1 triumph at Palmerston. Derek Lyle cancelled out Calum Gallagher's opener but Sean Higgins pounced in stoppage time for the Blue Brazil.

Falkirk kept up their good run with a 3-0 win at Dumbarton to stay just outside the play-off places. Rory Loy scored early on and Blair Alston and Craig Sibbald netted in the last 10 minutes.