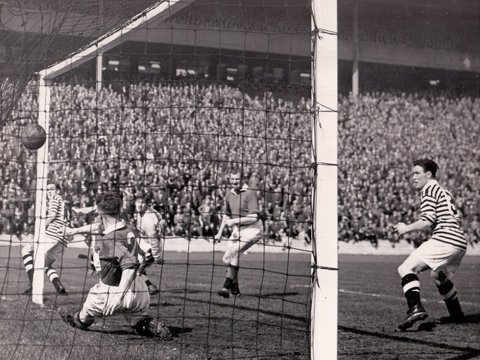 Clyde travel to face Rangers on Boxing Day on Third Division duty and then the Ibrox men head to Hampden to face Queen&rsquo;s Park and not many people would have predicted these festive fixtures a year ago, especially as it has been 55 years since all three clubs last shared a League table.

Clyde travel to face Rangers on Boxing Day on Third Division duty and then the Ibrox men head to Hampden to face Queen’s Park and not many people would have predicted these festive fixtures a year ago, especially as it has been 55 years since all three clubs last shared a League table.

Back in 1957-1958 the trio competed in the old style First Division and one player who figured prominently at that time was George Herd.

The winger had played in the top flight in the black and white hoops of Queen’s Park the season before, and he featured in a classic game with the Ibrox side before donning what was then a red and white strip for Clyde and featuring against both the light blues and his former colleagues.

The classic game Herd played in was a 6-4 win for Rangers over Queen’s Park in April 1957 and in this and next week’s issues of the SFL Newsletter we include interviews with several of the players who featured in that Hampden match.

The first player we spoke to is the now 76-year-old Herd who scored the opening goal in the Easter Monday meeting over 55 years ago.

Herd had joined Queen’s Park in August 1956 after completing his National Service as a Physical Training Instructor which he combined with playing for Inverness Thistle. He was a Spider for a season before becoming a Scottish Cup winner with the Bully Wee and then heading south to join Sunderland where he stayed for 9 seasons before joining Hartlepool United for a short spell.

As well as his domestic career Herd also played for Scotland and he was delighted to talk through his career starting with the League meeting with Rangers.

Reports from the time talk about the game beginning in dramatic fashion with Bert Cromar missing a penalty for the home side after just 4 minutes following a foul on Junior Omand.

Herd gave Queen’s the lead on 14 minutes when he scored after an Omand shot had hit the post and 5 minutes later Hunter Devine scored the first of a hat-trick when he headed the amateurs two ahead.

Rangers got on the score-sheet within a minute when former Queen’s Parker Max Murray headed in a corner.

The game drew breath for a short while, however 4 goals in the last 7 minutes of the first half brought it roaring back to life with Devine scoring twice to have his side 4-1 ahead, however crucially Jonny Hubbard grabbed a double of his own to bring Rangers back into things before half-time.

The home-sides plans to keep hold of their lead took a huge blow when Omand was injured (with two of his team-mates having differing views on how that happened and they can be read next week) and with no substitutes it became a 10 against 11 contest with Omand reduced to a walking role on the right wing.

Murray, Billy Simpson and Alex Scott all scored to turn things around and set Rangers up to win the League in their remaining two games against Queen of the South and Dunfermline Athletic.

Herd said, “I remember that game and scoring in it. At 4-1 up we felt we could win and even at half time at 4-3 we thought we were in with a chance. Hunter was a big tall striker and he did really well getting the hat-trick however we tired with the ten men after Junior was injured and eventually lost.”

Clyde were in the Second Division that season, however they won promotion and recruited outside right Herd after he impressed in Glasgow Cup and Scottish Cup games against the Bully Wee in his season as a Spider.

Herd signed on May 4 1957 for the then Shawfield based Second Division Champions, just 13 days after the 6-4 league encounter, and he actually played again against Rangers that night in a Glasgow Charity Cup semi-final at Ibrox.

Unfortunately for Herd he was unsuccessful again going down 2-0.

“I moved just along the road to Rutherglen,” said Herd before adding, “And I did go on and eventually have success against Rangers. I remember beating them in the Glasgow Charity Cup as well as the Glasgow Cup during my time there. These were big games for the Bully Wee at the time.”

The season the clubs were all in the same division saw Rangers finish runners up to Hearts having won all four of these local Derbies with 3-1 and 2-0 wins over Clyde as well as 5-1 and 4-2 success against Queen’s side that were relegated.

Clyde, who finished fourth, won 4-1 at Hampden however they lost 3-2 to the Spiders at their Shawfield home.

Herd returned back to Hampden in April 1958 for the biggest success of his career on this side of the border, when Clyde defeated Hibs 1-0 to lift the Scottish Cup with Herd saying, “I enjoyed my time at Clyde and winning the Scottish Cup was a great achievement. Johnny Coyle scored the only goal against a good Hibs side. I have always side that if you took the Rangers defence from around that time and the Hibs attackers from the fifties you would have a great team.”

“Gordon Smith of Hibs was a great player, an elegant player, but he missed out that day through injury.”

Herd was to leave Clyde 3 years after that success later for Sunderland with the then Roker Park side paying a fee that was reported as £42,500 which was their record signing at the time. He was to play there for 9 seasons before ending his playing career with a short spell at Hartlepool United and Herd said, “I had 15 years as a player with 5 good full seasons in Scotland and 9 good seasons in England with only the last one ruined by injuries.”

Last year Herd’s time with Clyde was acknowledged when he was inducted into Clyde’s Hall of Fame some 5 decades after leaving them and he remains delighted at the honour saying, “To think it was 50 years ago I was there it was really nice of them to invite me to join their Hall of Fame. It was even more special that I was in the first batch of inductees.”

As well as a strong career on both sides of the border Herd played in dark blue for the Scottish League, Scotland under-23 side as well as picking up 5 full International caps.

Six months after the ten goal game between Queen’s and Rangers Herd was back at Hampden for his international debut as he explained, “I played at an under-23 level and we beat Holland 4-1 in October 1957. I scored a goal as did my team-mate from Clyde Dan Currie.”

Hampden was becoming a regular haunt for Herd even though he had left Queen’s Park as just a week before the Bully Wee’s Scottish Cup Final success in April 1958 Herd made his international debut at the Mount Florida ground he knew well against England in a game that would settle the outcome of the Home International Championship.

It was not to be a dream debut score wise, however Herd still enjoyed it as he explained, “There were a few of us making our international bows that day including James Forrest of Motherwell, Tommy Ewing of Partick Thistle and Jim Murray of Hearts.”

“There were 134,000 people there and the buzz you got from the crowd was incredible.  You don’t hear anything apart from noise which sounds crazy but you couldn’t make anything out. I never scored and we lost 4-0 but it was still a great day.”

In June 1960 Herd was capped again in Hungary and he said, “They had not long lost Ferenc Puskas as a player but they were still a strong side. I scored to put us 2-1 up after about an hour and then Alex Young made it 3-1 but they scored twice late on to draw 3-3. The equalising goal was very late on and well into added time.”

Herd quickly followed that game up with a 4-2 defeat in Turkey, a 2-0 loss in Wales before his international career drew to a close with a 5-2 win over Northern Ireland where one of the goals came from Eric Caldow of Rangers, who ironically had conceded the early penalty that Bert Cromar missed in the 6-4 game.

The three Scottish League appearances Herd made saw him finish on the losing side to England again, as an English League side won 1-0 at Arsenal’s Highbury ground in late March 1960 with better fortune being seen 6 months later in a 2-1 win over the Irish League at Belfast’ s Windsor Park.

His final appearance saw Herd net a hat-trick at Celtic Park as the League of Ireland were defeated 5-1.

Herd finished by saying, “I live in the North East of England now but I still keep an eye out for the results of Queen’s Park and Clyde. To see the two of them up against Rangers again is incredible and reminds me of a lot of good times in my own playing career.

For details of the December 29 meeting between Queen’s park and Rangers please visit http://www.queensparkfc.co.uk/News/Rangers/tickets.html