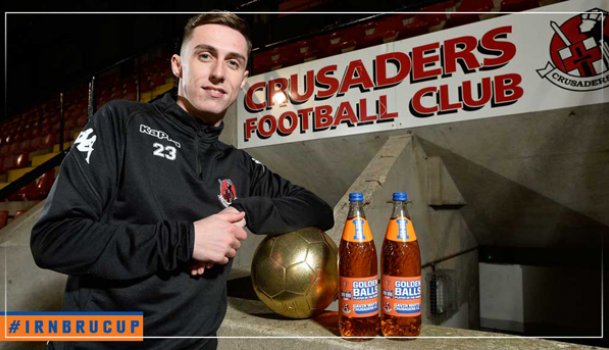 Flying winger Gavin Whyte experienced a wee flavour of Scotland as he received IRN-BRU&rsquo;s Golden Balls Award for his last-minute goal that fired Crusaders into the semi-finals of the IRN-BRU Cup.

Flying winger Gavin Whyte experienced a wee flavour of Scotland as he received IRN-BRU’s Golden Balls Award for his last-minute goal that fired Crusaders into the semi-finals of the IRN-BRU Cup.

The promising young winger becomes the first Northern Irish winner of the award after the competition was expanded ahead of the 2016/17 season.

Coming on as a second-half substitute on the hour mark with his team trailing 1-0, Gavin’s introduction helped lift his side to a rousing comeback, capped off in the second minute of added time when he latched on to a long clearance downfield to blast home the winner.

Crusaders now face a trip to the Highlands where they will take on Inverness Caledonian Thistle for a place in the final. The Crues will travel across the Irish Sea again brimming with confidence after defeating the holders at Tannadice.

With five U21 caps under his belt and after having trained with Everton and Celtic last summer, Gavin will be hoping he can once again provide the wizardry from the wing that would see his side become the first non-Scottish club to reach the IRN-BRU Cup final.

On receiving the IRN-BRU Cup Golden Balls Award, Gavin said: “It’s always fantastic to get recognition from the fans so I’m delighted with the award and to have helped the team reach the semi-final.

“As a club we have really enjoyed the competition so far and getting to play against some new faces and visiting new grounds along the way has been an added bonus. Edging past the current holders Dundee United was a great feeling and I know the lads are itching to become the first non-Scottish side in the final.

“The semi-final tie away up in Inverness will be difficult but we’ll be going there full of confidence and I know our fans will enjoy the trip!”