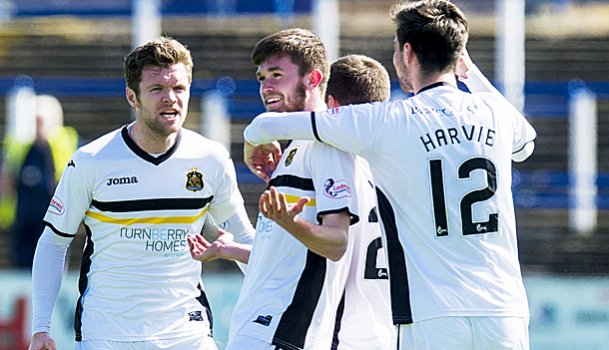 Key win for Sons but Saints lose out

Dumbarton claimed a crucial 2-1 away win over Queen of the South to climb to seventh place in the Ladbrokes Championship.

Dumbarton claimed a crucial 2-1 away win over Queen of the South to climb to seventh place in the Ladbrokes Championship.

Stephen Dobbie gave Queens the lead at Palmerston but Sam Stanton and Robert Thomson struck for the Sons before half-time.

St Mirren slipped back into the bottom two after losing 3-2 to Dundee United in a dramatic match at Tannadice. Gary MacKenzie and Josh Todd cancelled out goals from Thomas Mikkelsen and Tony Andreu but Blair Spittal grabbed a last-minute winner for Ray McKinnon's men, who stay third in the table.

Second-placed Falkirk hit back to beat local rivals Dunfermline Athletic 2-1 at East End Park. Nicky Clark had the Pars ahead but Aaron Muirhead equalised from the penalty spot and Nathan Austin was the matchwinner after Lewis Martin had been sent off.

Bottom club Ayr United drew 1-1 with Morton at Cappielow - Lawrence Shankland's opener was cancelled out by Craig Moore as the home side sealed a play-off place.