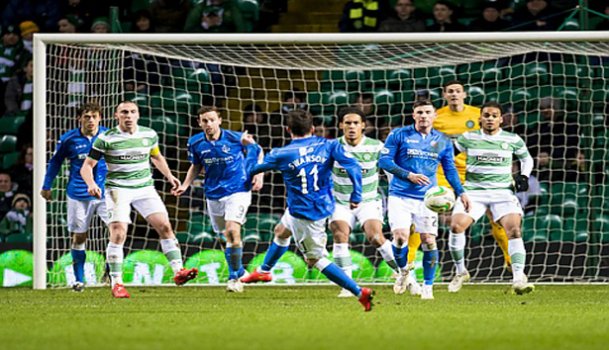 In this week&rsquo;s Magic Numbers, we take a look at number 11s who have wowed us with individual moments of brilliance over the past&nbsp;few years.

In this week’s Magic Numbers, we take a look at number 11s who have wowed us with individual moments of brilliance over the past few years.

Iain Vigurs – Inverness CT/Ross County/Motherwell
A man who tends only to score belters, Iain Vigurs started his career with Elgin City before moving to Inverness CT in 2006. The midfielder managed two goals in 21 appearances during his first stint at the Tulloch Caledonian Stadium before moving to Highland rivals Ross County in 2009. It was during his time at the Staggies that we began to see his explosive left foot in action, peaked with a stunning goal against Celtic in May 2013. Vigurs moved to Motherwell a few months later, and played at Fir Park for a further two seasons. He again displayed his striking ability with a smashing free-kick against former employers Ross County in September 2013. He is now back playing for Inverness CT, and continues to show his form in front of goal on a frequent basis.

Kári Árnason – Aberdeen
One year in Scottish football is all it took for Icelandic international Kári Árnason to become a cult hero at Aberdeen. Having dotted about football in Iceland, Sweden, Denmark and England, Árnason showed up on Scottish shores looking for the next chapter in his career to kick off. After spending time on trial at Hearts, the defensive midfielder signed a one-year deal with the Dons in 2011. He went on to make 33 appearances for Craig Brown’s side, scoring three goals while he was at it. Although a goal against Rangers will always gain you favour with the Aberdeen faithful, it was his howitzer against Dundee United in a 2-1 victory at Tannadice that will be long remembered. Árnason headed south at the end of his contract, spending time at Rotherham United, before joining his current side Malmö FF. He will also be fondly remembered in Scotland for an assist in Iceland’s 2-1 win against England at EURO 2016.

Graham Carey – St Mirren
A wonder-strike. A worldie. A pearler. A peach. A raker. Whatever you want to call it, you’ll be bang on the money when describing Graham Carey’s Goal of the Season from 2013. The former Celtic and Bohemians man picked the ball up just over halfway, shuffled his feet and sent a dipping long-range drive over the despairing Jamie MacDonald in Hearts’ goal. Previously well known for his quality delivery in wide areas, Carey announced himself as capable of long-distance wizardry with that strike. Over two spells with the Buddies, he managed 70 appearances and six goals. Since his departure from St Mirren, where he left with a nice shiny League Cup medal, the left winger has had a spell with Ross County and now finds himself playing on England’s south coast with Derek Adams’ Plymouth Argyle.

Jonny Hayes – Inverness CT/Aberdeen
After some loan periods in the English leagues, a 22-year old Jonny Hayes made the journey up north and signed for Division One Inverness CT. During his first season, Hayes helped the Caley Jags gain promotion to the SPL under boss Terry Butcher. Hayes would go on to be an integral part of the Caley Thistle attack in the SPL, and announced himself on to the top division scene with a sensational swerving strike against Rangers at the Tulloch Caledonian Stadium. The Dublin-born winger would go on to excite and impress in the red & blue for a further two years, before signing for fellow SPL side Aberdeen in 2012. Jonny Hayes continues to play at Pittodrie, and has a fine history of stunning goals, namely his efforts against Celtic in 2014 and 2016.

Danny Swanson – St Johnstone
Once described by former Scotland, Hearts and Dundee United manager Craig Levein as “the most talented player I have worked with”, Danny Swanson has been showcasing his talent in Scotland for a number of years. Originally signed by Levein at Dundee United from Berwick Rangers in 2008, the midfielder wasted no time in expressing his obvious talent in a strong Tangerine midfield. By the time he left the Arabs, Swanson had amassed 108 appearances and 12 goals, as well as a Scottish Cup medal. Following spells at Peterborough United and Coventry City, Swanson was snapped up on loan by St Johnstone gaffer Tommy Wright in 2015. It was during this spell that the tricky attacker caused jaws to drop as he lashed in a stupendous volley at Celtic Park to earn his new side a victory in Glasgow. When his loan ended, Swanson joined Heart of Midlothian for six months before returning to Wright and St Johnstone in February 2016.