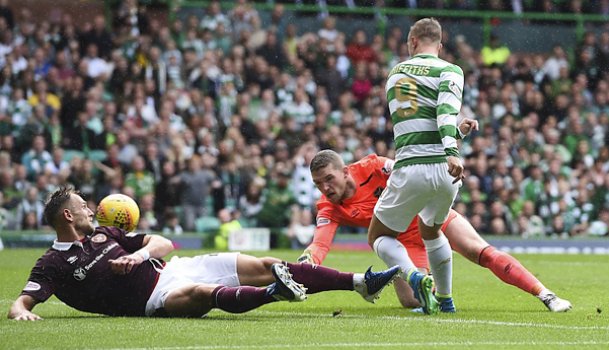 Leigh Griffiths scored the first SPFL goal of the season as reigning champions Celtic began their campaign with 4-1 win over Hearts.

Leigh Griffiths scored the first SPFL goal of the season as reigning champions Celtic began their campaign with 4-1 win over Hearts.

Elsewhere in the Ladbrokes Premiership, Hibernian marked their top-flight return with a 3-1 victory over Partick Thistle at Easter Road.

Ladbrokes Championship favourites Dundee United started with a 1-0 win away to relegated Inverness CT thanks to a Paul McMullan penalty.

St Mirren hit back to beat Falkirk 3-1 in a big game in Paisley and Queen of the South top the early table after a 4-1 victory over Brechin City at Palmerston. Livingston and Dunfermline Athletic drew 1-1 and it finished 0-0 between Dumbarton and Morton.

Jamie Stevenson scored in stoppage time as Ladbrokes League 2 favourites Peterhead came from behind to beat Annan Athletic 2-1 at Galabank.

There was also a comeback at Ochilview as Stirling Albion beat Stenhousemuir 3-2 and it was the same story at Shielfield as Berwick Rangers saw off Clyde 3-1.

Montrose opened up with a 3-1 win at Edinburgh City and it was 1-1 between Elgin City and Cowdenbeath at Borough Briggs.