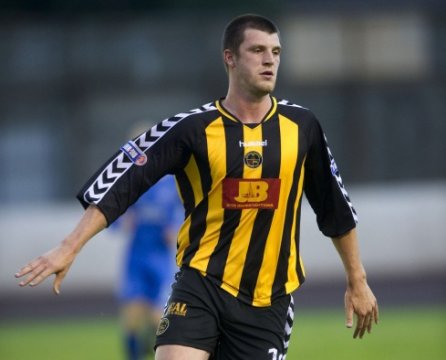 O'Reilly on a roll

Berwick Rangers striker, Craig O&rsquo;Reilly, may have seen partner Darren Gribben grab plenty of headlines this season with his two hat-tricks at Shielfield Park however, Reilly, who turns 23 on Monday, has created history for himself by racking u

Berwick Rangers striker, Craig O’Reilly, may have seen partner Darren Gribben grab plenty of headlines this season with his two hat-tricks at Shielfield Park however, Reilly, who turns 23 on Monday, has created history for himself by racking up a goal in each of his last four games.

The six foot one inch front man, who has scored against Elgin City, Clyde, Queen’s Park and Arbroath, said, “I think it is safe to say that is a record for me and one I am really pleased with.  Darren and I have been playing well and we just clicked up front right away.”

There may be a good reason for the pair to be in such fine form with O’Reilly saying, “I think we have both got a point to prove after spending last season in the Juniors and so far, we are proving our point well.”

Bonnyrigg boy O’Reilly started his career at Stark’s Park and he achieved a major milestone whilst he was still combining being a player with studying at school.

He explained, “Raith Rovers were my first club and I only scored one first team goal but I remember it like it happened yesterday.

“I was only 16 at the time but I scored with a left foot shot against Brechin City after 52 minutes.  It was the goal that ensured Raith Rovers were in the First Division the next season.”

It had been a tight race with Ayr United to avoid relegation and O’Reilly’s goal, along with a draw for the Honest Men at Falkirk, avoided a last day shoot-out at Somerset Park between the sides.

He added, “I then joined Rovers full-time straight from school and played for their Under-17 side and scored a few goals at that level.

“Claude Anelka came in that summer with a whole lot of French players and basically, the Scottish youngsters never got much of a chance.

“I went off to Montrose on loan for a period, came back and started hearing whispers about Jim Duffy being interested in taking me to Dundee.”

Those whispers were followed up with a genuine interest and O’Reilly was on his way to Dens Park.

The striker said, “I got the chance to move on a full-time basis to Dundee in October 2005.  Jim Duffy did take me there but he was not there for much longer and it was at Dundee that I experienced the biggest let down of my career.

“I had played and scored in the earlier rounds of the Scottish Cup that season and we reached the Semi-Final against Gretna at Hampden and I was not even listed as a substitute.

“That was a real disappointment especially as Dundee were beaten 3-0 that day.”

O’Reilly moved to Third Division East Fife in the summer of 2006, initially on loan, and scored seventeen times during the following season, including a hat-trick in a Play-Off Semi-Final win over Stranraer.

Queen’s Park won the Play-Off Final and were promoted to the Second Division under Billy Stark however, O’Reilly along with his new Fife chums, were not to be denied the following season as East Fife romped to the title.

“It was a really strong team with players capable of playing in higher divisions,” said O’Reilly before adding, “ Dave Baikie was the Manager and I joined as a permanent player but I was only part-time.  I wanted back to full-time football so I was released to join Clyde in January 2009.”

O’Reilly explained how the move came about saying, “John Brown invited me in for training at Broadwood and liked what he saw.

“He gave me a full-time deal in the First Division but I did not play as often as I had hoped and I went back to Montrose on loan again.”

The Links Park side were managed by a former East Fife team-mate in Steven Tweed and O’Reilly enjoyed his spell saying, “I had a good time at Montrose. It was good to be playing again and I scored three goals in my eight games there which was not too bad a return.

“I went back to Clyde and in the summer of 2009, I was released as was everyone else by Clyde.”

Stenhousemuir Manager John Coughlin took O’Reilly to Ochilview however, he was more substitute than starter and after a few months, was at a crossroads. He considered a move to America and he opted to get some game time with his local Junior side Bonnyrigg Rose as he pondered his next career stop.

“I was fed up and wanting to play football,” said the striker before adding, “Bonnyrigg had not been long knocked out of the senior Scottish Cup so they had a good profile and I joined then.

“I enjoyed my time there even coming across my old boss Dave Baikie who is now Manager at Linlithgow Rose.

“I was still thinking about America when Berwick got in touch and I decided to go in and see what would happen.

“It has been great, the training venue is only 15 minutes away from where I live and there is a really good group of players there.”

There appears to be a real team spirit over the Border with O’Reilly saying, “Darren, who returned to Berwick after a spell at Bo’ness, and I may be getting the goals but everyone is involved.

“The defence have kept things really tight and the midfield has been amazing. David Greenhill gets the ball and calms everything down and plays great passes whereas Paul Currie is constant energy and he has been rewarded with a few goals as well.

“We could sense early in pre-season when we drew with St. Johnstone and Raith Rovers that we were in good shape.

“You often worry that full-time teams will steamroller over you towards the end of a game with their fitness however, Ian Little works us hard on the fitness side but with things that players want to do and that appears to be paying off as well.”

O’Reilly has even managed to fall in love with Hampden again saying, “I went back there for the first time since the Dundee game recently and we won 2-0 against Queen’s Park.

“I have to saw it was an unbelievable pitch and probably the best I have ever played on. Darren rolled the ball into my path for the second goal and I thought this will do me and I did not have to worry about any bobbles or anything like that and I just stroked it in.”

“I know that goal and the goal I got against Clyde are on sfl.tv but the ones from our home games are not on it as yet.”

There is a table top clash at Shielfield on Saturday with the winner taking first spot and O’Reilly said, “We have a tough game against Stranraer at the weekend and Craig Malcolm, who started off at Raith Rovers at the same time as me, is in great goalscoring form as well.”

The winners are not ensured of being considered title favourites with O’Reilly finishing by saying, “The two of us may be battling it out for the top of the table but I reckon that Arbroath and Clyde are still the favourites for the Championship.”