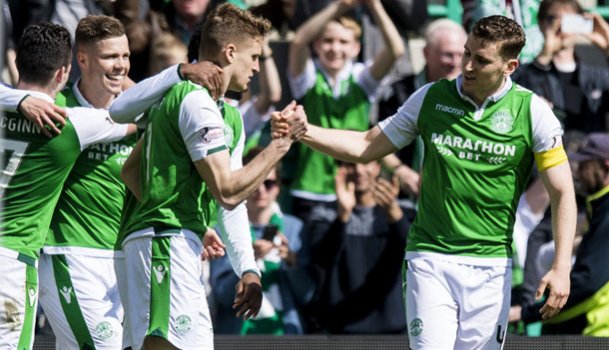 A win in the capital on Saturday lunchtime would have earned the Hoops a seventh successive title but goals from Jamie Maclaren and Vykintas Slivka had Neil Lennon's side in command before Odsonne Edouard pulled one back late on.

Aberdeen moved up to second spot with a 2-0 success at Kilmarnock and remain the only team to have beaten Killie in 2018. Rangers face Hearts on Sunday, live on Sky Sports at 12.30pm.

Partick Thistle came from behind to beat Hamilton Accies 2-1 at Firhill and move off the foot of the table at the expense of Ross County, who drew 0-0 with Motherwell in Dingwall. A Sofien Moussa double earned Dundee an important 2-1 victory over St Johnstone at Dens Park.

Livingston are guaranteed second spot in the Ladbrokes Championship after seeing off bottom club Brechin City 3-0 at the Tony Macaroni Arena while St Mirren celebrated their title success with a 2-1 home win against Morton. Third-placed Dundee United lost 3-0 at Queen of the South and Dunfermline Athletic, in fourth, earned a crucial point in a 2-2 draw at Inverness CT with an equaliser deep into stoppage time. Falkirk ran out 5-2 winners away to Dumbarton.

Raith Rovers went top of Ladbrokes League 1 after a 3-0 victory away to Stranraer, with title rivals Ayr United away to Alloa Athletic on Sunday, live on BBC ALBA at 4.10pm. The Wasps are now guaranteed a play-off spot, as are Arbroath, who beat Airdrieonians 2-0 at Gayfield. Albion Rovers ended their long losing run with a 1-0 home win over East Fife while bottom club Queen's Park drew 1-1 away to Forfar Athletic.

Montrose need just one point against Elgin City at Links Park on Saturday to seal the Ladbrokes League 2 title after two early goals secured a 2-0 win at Stenhousemuir. Peterhead stayed in contention by beating Elgin 1-0 at Borough Briggs while third-placed Stirling Albion lost 3-1 to Annan Athletic at Galabank, with Blair Henderson bagging a hat-trick. Clyde still have a chance of making the play-offs after seeing off Edinburgh City 3-1 at Ainslie Park and Berwick Rangers defeated bottom club Cowdenbeath 1-0 at Shielfield.