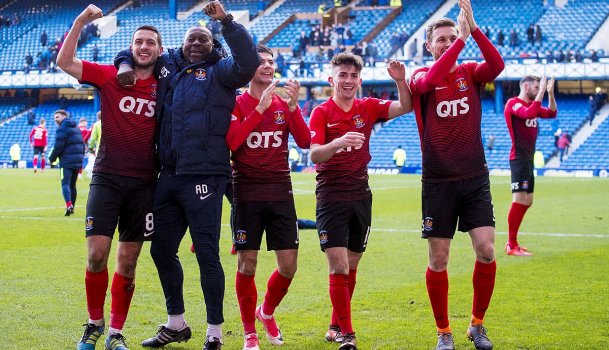 Kilmarnock continued their fine run of form under Steve Clarke with a 1-0 win over Rangers in the Ladbrokes Premiership on Saturday.

Kilmarnock continued their fine run of form under Steve Clarke with a 1-0 win over Rangers in the Ladbrokes Premiership on Saturday.

Kris Boyd scored the only goal early in the second half as the Rugby Park side claimed all three points at Ibrox. Graeme Shinnie was on target as Aberdeen beat Dundee 1-0 at Pittodrie and Kyle Lafferty was on target as Hearts beat Partick Thistle 3-0 at Tynecastle. Bottom club Ross County were ahead then behind as they eventually drew 2-2 with Hamilton Accies in Dingwall.

St Mirren took another step towards the Ladbrokes Championship title with a 3-1 win over Queen of the South at Palmerston with goals from Danny Mullen, Lewis Morgan and Kyle Magennis. Closest challengers Livingston drew 0-0 with Falkirk at the Tony Macaroni Arena and it was also 0-0 between Dunfermline Athletic and Morton at East End Park. Dundee United and Inverness Caley Thistle drew 1-1 at Tannadice while Dumbarton saw off bottom club Brechin City 3-1 at Glebe Park.

Montrose have a three-point lead over Peterhead with a game in hand at the summit of Ladbrokes League 2 after beating their title rivals 3-2 at Links Park. Jordon Brown’s opener was cancelled out by Terry Masson but Allan Smith restored the Blue Toon’s lead. Chris Templeman equalised and Lewis Milne grabbed the winner for Stewart Petrie’s side. Bottom club Cowdenbeath defeated Elgin City 3-1 at Central Park while it finished 1-1 between Annan Athletic and Clyde and 2-2 between Edinburgh City and Stirling Albion. Berwick Rangers v Stenhousemuir was postponed