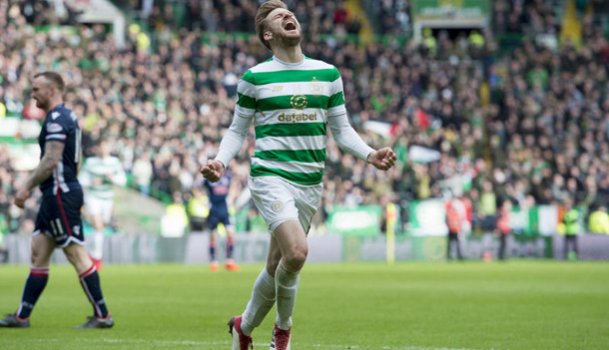 Celtic are 12 points clear at the top of the Ladbrokes Premiership after a 3-0 win against bottom club Ross County at Parkhead.

Celtic are 12 points clear at the top of the Ladbrokes Premiership after a 3-0 win against bottom club Ross County at Parkhead.

Moussa Dembele (penalty), Stuart Armstrong and Tom Rogic were on target for Brendan Rodgers’ side as they took a step closer towards retaining the title. Rangers fought back to draw 2-2 with Motherwell in the early game at Fir Park while Aberdeen saw off St Johnstone 4-1 at Pittodrie and Hibernian defeated Partick Thistle 2-0 at Easter Road. It was also 2-0 for Kilmarnock against Hamilton Accies at Rugby Park. Dundee host Hearts on Sunday, live on Sky Sports at 12.30pm

Ladbrokes Championship leaders St Mirren were pegged back for a 2-2 draw by Inverness Caley Thistle in the Highland capital but are 12 points clear of Livingston, who won 3-0 at Dumbarton. Nicky Clark hit a hat-trick as Dunfermline Athletic moved into the top four with a 3-1 home victory over Queen of the South. Morton scored late to earn a 1-1 draw with Dundee United at Cappielow and Falkirk saw off relegated Brechin City 3-0 at the Falkirk Stadium.

Ayr United remain three points clear in Ladbrokes League 1 after Craig Moore converted a late penalty in a 3-2 success at East Fife while second-placed Raith Rovers also left it late to beat Albion Rovers 2-0 at Stark’s Park. Alloa Athletic hit back to edge out Arbroath 3-2 at the Indodrill Stadium and leapfrog the Red Lichties into third place. Stranraer were 2-0 winners against Forfar Athletic at Stair Park and it was 0-0 between bottom club Queen’s Park and Airdrieonians at Hampden.

It’s as you were at the top of Ladbrokes League 2, with Peterhead still top on goal difference after beating Clyde 3-0 at Balmoor. Montrose dismissed Edinburgh City by the same score at Links Park and it was also 3-0 at Borough Briggs as Elgin City moved into the top four by beating Stirling Albion. Bottom club Cowdenbeath drew 1-1 with Stenhousemuir at Central Park and it was 0-0 between Berwick Rangers and Annan Athletic at Shielfield.