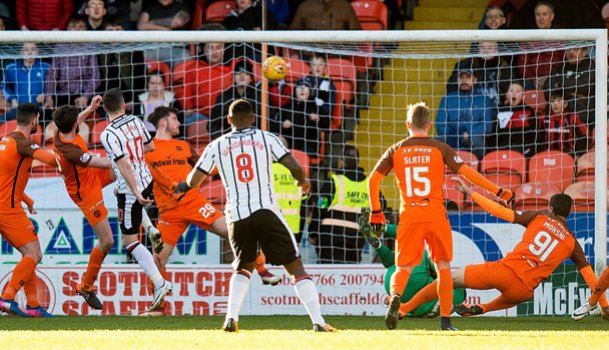 There were 13 games played across three divisions of the SPFL on Saturday, with no Premiership matches due to the international break.

There were 13 games played across three divisions of the SPFL on Saturday, with no Premiership matches due to the international break.

Promotion rivals Dundee United and Dunfermline Athletic drew 1-1 at Tannadice in the Ladbrokes Championship while second-placed Livingston were denied full points by a late equaliser in a 3-3 draw at Queen of the South. Morton moved up to third spot by beating Brechin City 2-0 at Cappielow as the visitors' relegation was confirmed.

Lawrence Shankland grabbed a first-half hat-trick as Ayr United saw off bottom club Queen's Park 4-0 at Somerset Park to stay six points clear in Ladbrokes League 1. Raith Rovers, who have a game in hand, beat Airdrieonians 2-1 at the Excelsior Stadium and Alloa Athletic are up to third after a 3-1 victory away to Albion Rovers. Stranraer stormed back to beat Arbroath 3-2 at Gayfield and Forfar Athletic are now four points clear of the relegation places after a 2-0 home success against East Fife.

Jamie Stevenson struck late on as Peterhead beat Annan Athletic 1-0 at Balmoor to go top of Ladbrokes League 2 on goal difference. Montrose were knocked off the summit after losing 3-0 at Clyde, who are now just two points outside the top four. Elgin City beat play-off rivals Stenhousemuir 2-0 at Ochilview and bottom club Cowdenbeath held Stirling Albion to a 2-2 draw at Forthbank. Berwick City and Edinburgh City drew 1-1 at Shielfield.