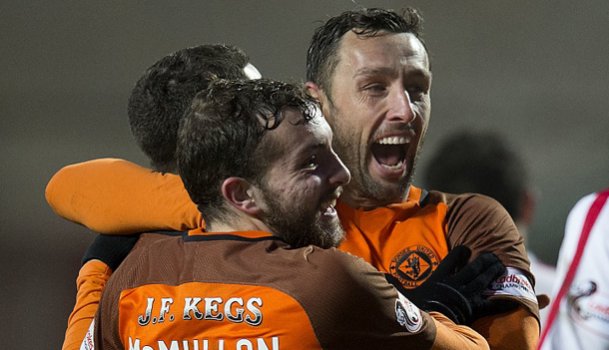 Scott McDonald bagged a double at Tannadice while Saints were held to a 1-1 draw at Morton, with Thomas O'Ware cancelling out Lewis Morgan's opening goal.

Dunfermline Athletic defeated Falkirk 2-0 in front of more than 7,000 fans at East End Park, Inverness Caley Thistle and Livingston drew 1-1 in the Highland capital and it was 0-0 between Queen of the South and Dumbarton at Palmerston.

Ayr United stay two points clear in Ladbrokes League 1 after thumping Stranraer 5-1 at Stair Park, helped by doubles from Lawrence Shankland and Alan Forrest. Dario Zanatta scored the winner as second-placed Raith Rovers defeated East Fife 3-2 in Methil but Alloa, in third spot, were held to a 2-2 draw by Queen's Park at the Indodrill Stadium.

Arbroath moved into the top four with a 1-0 win at Forfar and Scott McLaughlin equalised in stoppage time as Albion Rovers and Airdrieonians drew 2-2 at Cliftonhill.

Peterhead hammered Elgin City 7-0 at Balmoor to take their goals tally to 13 in four days and close the gap on Ladbrokes League 2 leaders Montrose to a single point. It was only 1-0 at the break but Jim McInally's men netted six times in the second half, including two goals from Jamie Stevenson.

Montrose were held to a 1-1 draw by bottom club Cowdenbeath at Links Park while Stenhousemuir saw off Stirling Albion 2-1 at Ochilview and Annan Athletic moved into the top four with a 0-0 draw at Clyde. Scott Shepherd claimed a double as Edinburgh City beat Berwick Rangers 3-0 at Ainslie Park.