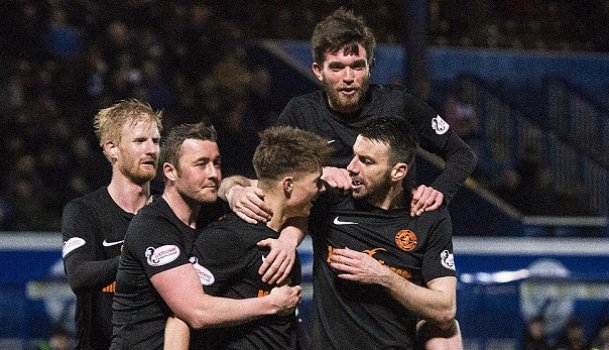 Dundee United moved up to third place in the Ladbrokes Championship with a 3-1 win over Queen of the South at Palmerston on Tuesday night.

Dundee United moved up to third place in the Ladbrokes Championship with a 3-1 win over Queen of the South at Palmerston on Tuesday night.

Matty Smith scored twice as Csaba Laszlo's side came from behind to move above Morton in the table. Jim Duffy's men drew 1-1 at second-placed Livingston who equalised through Jackson Longridge deep into stoppage time. Dunfermline Athletic beat Inverness CT 1-0 at East End Park with a James Craigen goal to move to within four points of the play-offs and Dumbarton recorded a 1-0 home win over bottom club Brechin City.

Ladbrokes League 1 leaders Raith Rovers were beaten 2-1 by Forfar Athletic at Station Park and Ayr United will go top if they avoid defeat at Arbroath tonight. East Fife were 2-1 winners away to Alloa Athletic and Airdrieonians beat Stranraer by the same score at the Excelsior Stadium. Albion Rovers have slipped into the relegation play-off place after a 1-1 draw with bottom club Queen's Park at Cliftonhill.

Chris Templeman bagged a double as Montrose beat Annan Athletic 2-1 at Links Park to move level on points with Ladbrokes League 2 leaders Peterhead ahead of Saturday's big game between the title rivals. The Blue Toon went down 2-1 to Stenhousemuir at Balmoor while third-placed Stirling Albion won 1-0 at Berwick Rangers with a goal from Andy Little. David Goodwillie netted as Clyde beat Elgin City 1-0 at Broadwood and it finished 1-1 between Edinburgh City and bottom club Cowdenbeath at Ainslie Park.