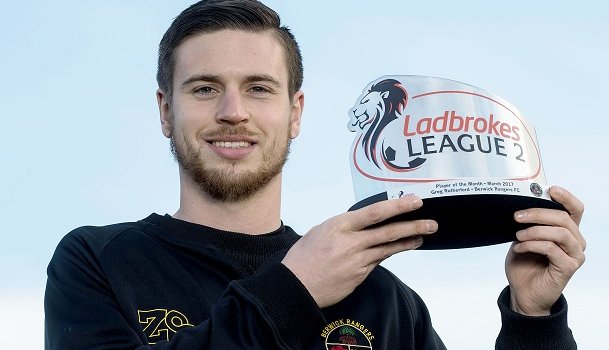 Berwick Rangers striker Greg Rutherford has been named Ladbrokes League 2 Player of the Month for March.

Berwick Rangers striker Greg Rutherford has been named Ladbrokes League 2 Player of the Month for March.

Rutherford told Ladbrokes News: "I had a goal drought before March but once you nick one you need to make sure you capitalise on it and hopefully it gives the rest of the team a boost as well.

“I’m still learning the game and every match is another experience. When you hit the back of the net each week, you go into the next game with a lot more confidence and self-belief.

"It’s a real shame how the results have gone. We’ve been a bit unlucky at times but we definitely need to keep working hard and keep battling in every match."

Berwick Rangers are just three points above bottom club Cowdenbeath as they prepare to welcome play-off chasing Montrose to Shielfield on Saturday.