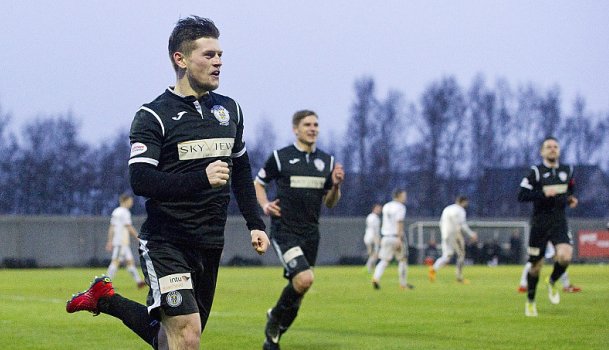 St Mirren have an eight-point lead at the top of the Ladbrokes Championship after beating Dumbarton 2-0 at the YOUR Radio 103FM Stadium.

St Mirren have an eight-point lead at the top of the Ladbrokes Championship after beating Dumbarton 2-0 at the YOUR Radio 103FM Stadium.

Cammy Smith and Stephen McGinn scored the goals early in the second half as Jack Ross's team increased their advantage over closest challengers Dundee United, who drew 0-0 with Dunfermline Athletic at East End Park.

Livingston moved back into the top four with a 2-0 victory away to bottom club Brechin City and Inverness Caley Thistle boosted their play-off hopes with a 3-1 triumph against Queen of the South in the Highland capital. Falkirk got the better of Morton, winning 1-0 at Cappielow.

A crowd of more than 3,000 saw Raith Rovers stay top of Ladbrokes League 1 following a 1-1 draw with title rivals Ayr United at Stark's Park. Lawrence Shankland gave the Honest Men the lead but Greig Spence equalised for Barry Smith’s side.

Arbroath are up to third thanks to a 2-1 win over Queen's Park at Gayfield while Alloa Athletic drop to fourth after a 2-1 defeat at East Fife. Michael Travis scored twice as bottom club Forfar Athletic beat Albion Rovers 4-2 at Station Park and Stephen Okoh bagged a brace as Stranraer edged out Airdrieonians 3-2 at Stair Park.

Ladbrokes League 2 leaders Montrose were 2-0 winners away to Edinburgh City but Peterhead remain just a point behind thanks to a 4-3 home victory against Stirling Albion, helped by a Russell McLean double. Third-placed Stenhousemuir beat Clyde 3-0 at Broadwood and Annan Athletic moved into the top four with a 2-0 success at Berwick Rangers. Elgin City scored late on to beat bottom club Cowdenbeath 1-0 at Borough Briggs.