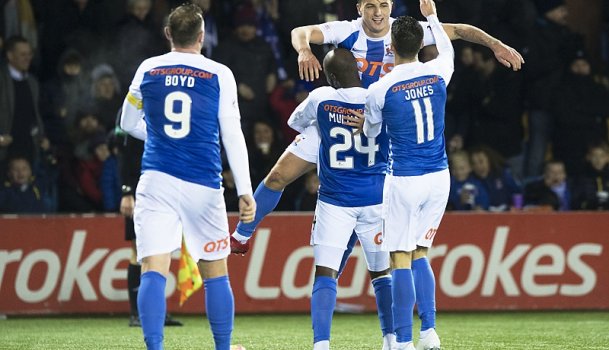 Kilmarnock ended their wait for a home win in style by thrashing bottom club Partick Thistle 5-1 at Rugby Park on Saturday.

Kilmarnock ended their wait for a home win in style by thrashing bottom club Partick Thistle 5-1 at Rugby Park on Saturday.

Kris Boyd and Eamonn Brophy both scored twice as Steve Clarke's men moved up to eighth place in the Ladbrokes Premiership. Rangers are back up to second after coming from behind to beat Ross County 2-1 at Ibrox thanks to a late goal from Danny Wilson. Kyle Lafferty got the only goal as Hearts defeated Motherwell 1-0 at Tynecastle and St Johnstone beat Hamilton Accies by the same score at the SuperSeal Stadium thanks to a Stefan Scougall goal.

Billy King scored twice as Dundee United defeated Morton 2-0 at Cappielow to stay a point clear in the Ladbrokes Championship. St Mirren remain in second spot following a 2-1 victory away to bottom club Brechin City and Queen of the South are up to third place after Stephen Dobbie grabbed a hat-trick in a 5-2 success at Dunfermline Athletic.

Gary Fraser bagged a brace as Montrose beat Berwick Rangers 3-0 at Links Park to return to the top of Ladbrokes League 2 while Annan Athletic are just outside the play-offs after Blair Henderson's hat-trick in a 3-1 victory over Stenhousemuir at Ochilview. Fourth-placed Elgin City scored late in a 1-1 draw with Edinburgh City at Borough Briggs.