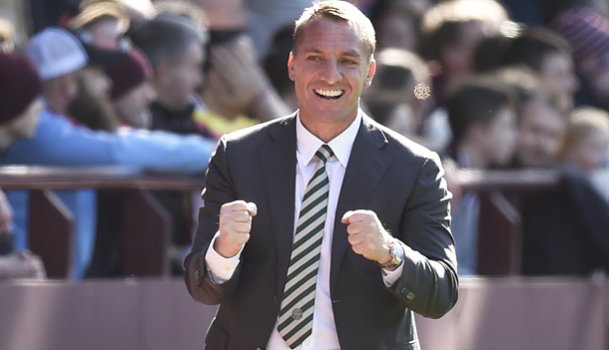 Celtic claimed the 2016/17 Ladbrokes Premiership title by hammering Hearts 5-0 at Tynecastle on Sunday afternoon, helped by a Scott Sinclair hat-trick.

Celtic claimed the 2016/17 Ladbrokes Premiership title by hammering Hearts 5-0 at Tynecastle on Sunday afternoon, helped by a Scott Sinclair hat-trick.

Hearts 1-2 Celtic - 07/08/16
A tricky opening game at Tynecastle saw James Forrest's early goal cancelled out by a Jamie Walker penalty but Scott Sinclair came off the bench to score a late winner on his debut.

Celtic 5-1 Rangers - 10/09/16
Moussa Dembele scored a hat-trick as Celtic thrashed their rivals in the Glasgow derby at Parkhead. Scott Sinclair and Stuart Armstrong were also on target for Brendan Rodgers' side.

Aberdeen 0-1 Celtic - 29/10/16
Celtic headed for Pittodrie with a seven-point lead at the top of the Ladbrokes Premiership and stretched their advantage thanks to a fine goal from Tom Rogic midway through the first half.

Motherwell 3-4 Celtic - 03/12/16
Celtic trailed 2-0 at the break and found themselves 3-2 down with 19 minutes left at Fir Park but Stuart Armstrong equalised and Tom Rogic scored a superb last-minute winner to settle a dramatic encounter.

St Johnstone 2-5 Celtic - 05/02/17
The Hoops' unbeaten run looked in threat at the interval but Moussa Dembele came off the bench to score a second-half hat-trick as the Parkhead men marched on at the top of the table.

Dundee 1-2 Celtic – 19/03/17
Having dropped points for only the second time this season in their previous game against Rangers, goals from Jozo Simunovic and Stuart Armstrong took Celtic to the brink of the title.