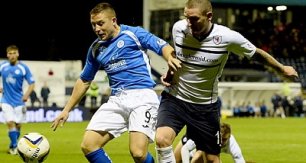 Queen of the South striker John Baird took time off from preparing for his side&rsquo;s game with Livingston this weekend to go under the SPFL Spotlight.

Queen of the South striker John Baird took time off from preparing for his side’s game with Livingston this weekend to  go under the SPFL Spotlight.

The 29-year-old joined the Doonhamers in the summer after becoming a cup final hero with Raith Rovers - he has also played for Clyde, St Mirren, Stenhousemuir, Montrose, Airdrie, Dundee and Partick Thistle.

What’s the best goal you have ever scored?
It has to be the one that won the Ramsdens Cup for Raith Rovers against Rangers earlier this year. I grew up a Celtic fan and scoring the winning goal in a cup final against their biggest rivals was something you could only dream about. It was not my best goal technically from the 105 I have scored in total - that was probably an overhead kick for Raith against Falkirk in 2011.

What’s the best game  you have played in?
The Ramsdens Cup final at Easter Road was an amazing day but, on a personal level, the best game I have ever played was a Division One match just over four years ago. That was when I scored a hat-trick for Raith Rovers in a 4-0 win over Partick Thistle at Stark’s Park on the opening day of the season.

What is your favourite away ground?
That has to be Celtic Park. I played there twice when I was with Dundee in the SPL.

What is your favourite other sport?
I like a bit of boxing and have done a bit of training for it. I have done all right in the bouts I have been involved in.

Which player in the world would you bring to Queen of the South?
Real Madrid’s Cristiano Ronaldo as he could play on the left and that would mean Iain ‘Beanie’ Russell has competition for his place. Ronaldo showed against Liverpool on Wednesday just how good he is with that superb goal.

What is your favourite pre-match meal?
Toast and poached eggs.

What is your favourite kind of music?
That has to be dance music. Beanie does the music for the boys and it is usually quite decent.

Who is the biggest moaner at the club?
If I take myself out of the running that will be Dowser, Andy Dowie.

Who has the best football tricks at Palmerston?
Danny Carmichael. I have played with a lot of skilful players and Danny is the best.

Who is the worst dressed at the club?
That has to be Higgy – Chris Higgins. I am not saying he is out of date but he is still wearing Vans.

Who is the best trainer?
Mark Kerr – one of the older ones but the best.

Who is the best dancer?
Lewis Kidd – one of the younger ones but the worst.