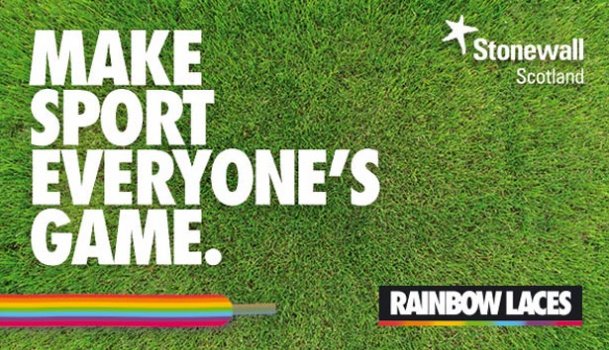 The Scottish Professional Football League is pleased to be supporting Stonewall’s Rainbow Laces campaign this autumn.

The SPFL will be showing its support by working with Stonewall Scotland to help make football more inclusive for LGBT players and fans. The SPFL will also be writing to all clubs to outline ways member clubs can choose to take part in the campaign, including showing their support on social media and wearing Rainbow Laces or armbands.

The campaign wants to make sport more inclusive for LGBT fans and players by raising awareness of anti LGBT abuse and asking clubs to show their support for the LGBT community.  Research carried out last year found that 72 per cent of football fans have heard anti-LGBT remarks at games over the last five years.

Neil Doncaster, SPFL Chief Executive, said:  “We are delighted to offer our support to Stonewall and the Rainbow Laces campaign 2017.  Both playing and watching sport should be inclusive, not divisive.  We stand alongside organisations and governing bodies across the footballing world as we strive to make participating in and attending football matches the best experience possible for all.”

Colin Macfarlane, Director of Stonewall Scotland, said:  “Our research made it clear that if the situation for LGBT fans is going to change, we will need support from across sport. It’s crucial for organisations like the SPFL to show they welcome lesbian, gay, bi and trans fans and players. At the moment, many LGBT people want to take part in sport, either as players or fans, but the abuse and hate from a minority of fans can make them feel unsafe, unwelcome or unable to be themselves.”

Stonewall has developed a range of measures to tackle homophobia, biphobia and transphobia in sport. The charity has developed a sports toolkit for grassroots and community sport teams to build awareness and understanding of the issues affecting LGBT people, and how they can help ensure all sports offer an inclusive and welcoming atmosphere. Stonewall will work with all of the clubs involved in Rainbow Laces to support their activities.

Dates and further information about how to take part will be released in the coming months.