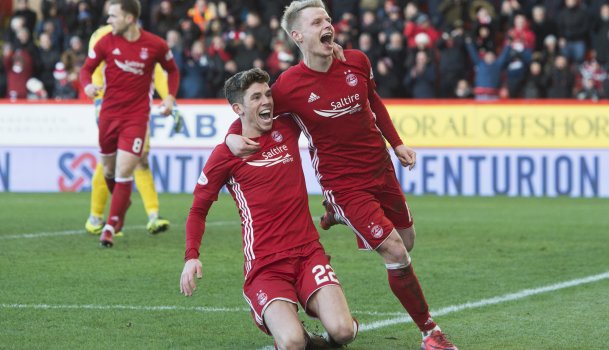 GK - Jamie MacDonald (Kilmarnock)
The goalkeeper made several impressive saves as Kilmarnock were able to grind out a 1-0 victory at home to Motherwell which extended Killie's unbeaten run to four games.

DC - Coll Donaldson (Inverness Caley Thistle)
Another terrific performance from the centre-back who has been reborn since signing for ICT, as John Robertson's men sneaked past Dumbarton at the Tulloch Caledonian Stadium.

DC - Jack Baird (St Mirren)
The Buddies' front players weren't on top form in a 1-0 win over a Dunfermline side in poor form but their defensive stars put in a top showing. Baird was the pick of the bunch.

DC - Michael Rose (Ayr United)
Two goals for the centre-back as Ayr moved eight points clear at the top of the Ladbrokes League 1 table with a comfortable 4-1 win at East Fife.

MR - Harry Paton (Stenhousemuir)
The only negative for Paton's day in Edinburgh was the injury which forced him off seven minutes before the end in Stenny's 2-1 victory over City. Until that point, Paton, on loan from Hearts, had scored a fine opener and was enjoying a productive day against the hosts.

MC - Chris Millar (St Johnstone)
The near-unanimous man of the match from the St Johnstone fans lucky enough to take in their first league win at Ibrox since 1971. The away side fought back from a goal down to win 3-1, with Millar organising the side in the centre.

MC - Danny Redmond (Hamilton Accies)
The midfielder brought a bit of drive and urgency as the home side survived a rollercoaster encounter with Ross County, winning 3-2 thanks to a late Jamie Lindsay own goal.

MC - Angus Beith (Stranraer)
The on-loan Hearts midfielder struck twice in the dying minutes as Stranraer eventually coasted to a 3-0 win over Forfar Athletic. The result moves the Blues into third place in the League 1 table.

ML - Gary Mackay-Steven (Aberdeen)
Dons fans were treated to a sensational performance on Saturday lunchtime as Mackay-Steven stuck three goals past Neil Lennon's visitors, while also laying the opener on a plate for Graeme Shinnie. Aberdeen are back in second thanks to the 4-1 triumph. He's this week's star man.

FC - David Milinkovic (Hearts)
Another incredible individual performance in front of the TV cameras, this one occurred at Tynecastle where Hearts stopped Celtic's unbeaten domestic run at 69 matches with a sensational win. Just about anyone in maroon deserved a place in this team but we've gone for Milinkovic for his two goals, assist and perfectly-weighted through ball which helped win the penalty which he tucked away.

FC - Soufien Moussa (Dundee)
Neil McCann was singing the praises of his striker after he netted twice in Dundee's 3-0 win over Partick Thistle. While both goals may have been penalties, Moussa's hold-up play was tremendous all match and heavily contributed towards the win.