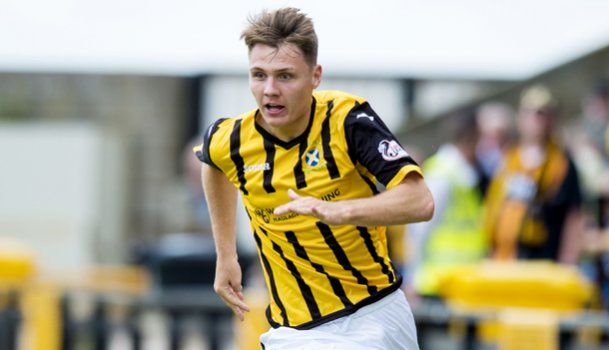 GK - Robbie Thomson (Falkirk)
The 24-year-old shot-stopper, signed from Hamilton Accies in January, has impressed since taking over from the unavailable Danny Rogers in recent weeks. He again put in a fine performance at the weekend, making a number of solid saves as Falkirk secured a 2-1 win at rivals Dunfermline.

DC - Thomas O'Brien (Forfar Athletic)
O'Brien was the Loons' man of the match as Gary Bollan's side kept their slender lead at the top of League 2 with a convincing 3-0 win over relegation-threatened Clyde. The centre-back never put a foot wrong in defence and even netted his side's third goal.

DC - Jason Kerr (East Fife)
East Fife are now up third in the table, an astonishing turnaround for a side that were threatened by relegation when Barry Smith took over. On-loan St Johnstone defender Kerr netted the only goal in the 1-0 win at Albion Rovers – his seventh in League 1 this season – and an excellent one at that. Winning the ball in defence, he charged up the field before laying on to Chris Duggan on the right. Not content with that, he strode into the penalty area and was on hand to sweep home Duggan's cross. This week’s star man.

DC - Matty Allan (Montrose)
Speaking of remarkable turnarounds, Montrose have gone from among the favourites for relegation to promotion hopefuls and are now in the League 2 play-off spots after a 1-0 win at Berwick Rangers. Helping to protect the clean sheet was Dundee loanee Matty Allan, who was often the last line of defence as Berwick threatened the visiting goal.

MR - Patrick Roberts (Celtic)
Impressive performance from the winger as Celtic ran out 2-0 winners over rivals Rangers in the Scottish Cup semi-final. Roberts would play a part in the second goal, putting Leigh Griffiths through with a perfectly-weighted ball, which drew a foul from James Tavernier inside the penalty area.

MC - Scott Brown (Celtic)
The Celtic captain was in terrific form in the Scottish Cup tie, bullying his opponents in the midfield area and passing the ball around effectively as the favourites strolled to victory. He'll be looking to get his hands on his third trophy this season when Celtic take on Aberdeen in the final next month.

MC - Sam Stanton (Dumbarton)
The Sons picked up a vitally-important result at the weekend, winning 2-1 away to Queen of the South and moving three points clear of the relegation play-off spot with two games left to play. Stanton got them on their way, continuing his fine form by netting Dumbarton's opening goal with a stunning free-kick.

ML - Jonny Hayes (Aberdeen)
Aberdeen are in the Scottish Cup final thanks to Darren McGregor's shin as much as Jonny Hayes, though the winger was Aberdeen's best player on the day, especially in the first half when the winger terrorised a Hibs side that struggled to get a foothold in the game.

FC - Grant Holt (Hibernian)
The best player on the park in Saturday's semi-final was undoubtedly Holt. The big striker was introduced after 32 minutes with his team 2-0 down and struggling big time. He immediately injected life into his side, heading home Martin Boyle's cross and leading the charge. The Easter Road side would eventually equalise, with Holt playing in Dylan McGeouch, before some bad luck cost them the chance at a second Scottish Cup final in succession.

FC - Thomas Mikkelsen (Dundee United)
The January signing is starting to pay dividends. Starting with his winner in the IRN-BRU Cup final, Mikkelsen has now netted five goals in his last seven games, the latest of which came in Dundee United's 3-2 win over St Mirren, and what a goal it was.

FC - Craig Beattie (Edinburgh City)
Fine performance from the veteran striker, who netted Edinburgh City's first goal in their 2-0 victory over Annan Athletic, which secured survival for the Meadowbank-based side. Considering City's start to the season, it's been an impressive turnaround as they've cemented their place in League 2 with two games to spare.