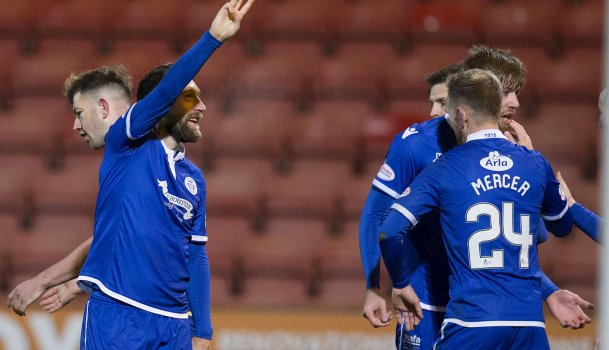 Craig Fowler selects his latest SPFL Team of the Week, with Queen of the South striker Stephen Dobbie the star man after a&nbsp;hat-trick at&nbsp;Dunfermline.

Craig Fowler selects his latest SPFL Team of the Week, with Queen of the South striker Stephen Dobbie the star man after a hat-trick at Dunfermline.

GK - Joe Lewis (Aberdeen)
Aberdeen got back to winning ways with a hard-fought 1-0 victory at Dens Park on Friday evening. It's safe to say they would not have left with the three points were it not for a terrific performance from their goalkeeper. Lewis made three crucial saves, including a spectacular denial of Roarie Deacon, to help claim the win.

DC - Kirk Broadfoot (Kilmarnock)
Having found himself out of the team following an indifferent start to the campaign, Broadfoot is now in an excellent run of form under Steve Clarke. He was at it again on Saturday, putting in a rock-solid performance as Killie battered Partick Thistle 5-1 to claim their first home league win of the campaign.

DC - Steven Anderson (St Johnstone)
Perhaps the performance of the season so far by the St Johnstone veteran as he and centre-back partner Joe Shaughnessy starred in their side's 1-0 victory at Hamilton Accies. The hosts had most of the pressure throughout the match, but the willingness of the Saints pairing to throw themselves in front of everything helped the away side record a valuable clean sheet.

DC - Efe Ambrose (Hibernian)
Four goals and plenty of thrills at Easter Road as Hibs and Celtic indulged in another titanic battle. While showing his usual confidence in possession, Ambrose also impressed in his defensive duties as Hibs fought valiantly against the might of Brendan Rodgers' side. Then there was the centre-back's goal, which got Hibs back into the match at 2-1.

MR - Billy King (Dundee United)
Two goals for the winger as Dundee United kept their place at the top of the Championship with a 2-0 win at Greenock Morton. The ex-Hearts man has been in impressive form since the arrival of Csaba Laszlo and continued that run with two second-half strikes.

MC - Prince Buaben (Hearts)
The Tynecastle club were able to record their first victory since mid-October with a 1-0 triumph over a Louis Moult-less Motherwell. Impressing in the middle of the park was Buaben. Not always a guaranteed starter with the Jambos, the Ghanaian played a key role in driving his team forward from deep and relieving the pressure on the defence.

MC - Steve Hetherington (Alloa Athletic)
The midfielder seemed to cover every blade of (artificial!) grass while simultaneously running proceedings as Alloa returned to winning ways following a pair of defeats with a 2-0 win at Forfar. Kris Renton bagged both goals and PJ Crossan sparkled on the wing, but it was Hetherington who was the consensus man of the match among the Alloa faithful.

ML - Scott Sinclair (Celtic)
If only every player could be as "out of form" as Scott Sinclair. The winger, supposedly having a poor season by his standards, bagged his 13th and 14th goals in all competitions by netting a brace at Easter Road. The Englishman was instrumental in Celtic's second-half performance as he continually got the better of marker Steven Whittaker.

FC - Stephen Dobbie (Queen of the South)
Just about the perfect performance. Not content with having a hand in both of his side's first-half goals as they raced into a 2-0 lead at East End Park, Dobbie then followed it up with a 15-minute hat-trick towards the end of the match as Queens made sure of victory with a 5-2 humbling of Dunfermline. For what could only be described as a '10 out of 10' performance, he is this week's star man.

FC - Gary Fraser (Montrose)
Having netted a total of 31 times in his previous two seasons, the veteran striker has found goals difficult to come by this term, with his double against Berwick his first league goals of the campaign. Getting Fraser in scoring form would be a welcome boost for Montrose, who moved back to the top of League 2 with their 3-0 triumph at Links Park.

FC - Blair Henderson (Annan Athletic)
Another hat-trick and another winning contribution from a player who's found goals hard to come by this term. Henderson hadn't netted since August but he struck all three goals as Annan left Stenhousemuir with a 3-1 win. The result means it's now six games without defeat for the Galabankies, who move to within a point of the play-offs.