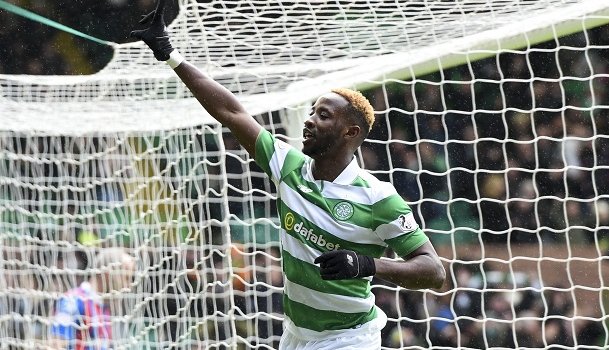 Craig Fowler selects his latest SPFL Team of the Week, with Celtic striker Moussa Dembele the star man after his hat-trick against Inverness CT.

Craig Fowler selects his latest SPFL Team of the Week, with Celtic striker Moussa Dembele the star man after his hat-trick against Inverness CT.

GK - Connor Quinn (Clyde)
Clyde remain in the Scottish Cup thanks to the performance of their 18-year-old ex-Livingston goalkeeper, who pulled off several great saves in the 1-1 draw away to Ayr United on his debut. The replay, at Broadwood, takes place this evening.

DC - Tasos Avlonitis (Hearts)
In a game of very few chances, the Greek centre-back was the stand-out performer for Hearts as the home side kept a clean sheet in their 0-0 Edinburgh derby meeting with Hibs at Tynecastle.

DC - Gary Dicker (Kilmarnock)
The midfielder continues to perform well at his new position of centre-back as Kilmarnock moved into the top six following Saturday's 1-1 draw with Dundee in the only Ladbrokes Premiership fixture of the weekend.

DC - Ryan McGeever (Queen's Park)
Queen's Park lifted themselves into the League 1 play-offs at the expense of Brechin after a battling performance by the 10 men secured a 2-0 win at Ochilview. McGeever and centre-back partner Bryan Wharton had to be at their best to repel Stenhousemuir attacks, as they sought to hold on to a 1-0 advantage following the sending off of Ross Millen. They were able to do so before Anton Brady sealed the win in injury time.

MR - James Forrest (Celtic)
The flying Celtic winger enjoyed a fruitful day attacking the Inverness CT defence on Saturday as his hat-trick of assists helped the hosts advance to the next round of the Scottish Cup after they thrashed the visitors 6-0.

MC - Marvin Bartley (Hibernian)
Sunday's Edinburgh derby wasn't much of a spectacle, but that was exactly the intention of Hibernian's midfielder spoiler. Bartley had a tremendous afternoon overpowering Hearts' forwards and continuously breaking up attacks.

MC - Tom Taiwo (Falkirk)
A tireless and tigerish performance from the diminutive midfielder who covered every artificial blade of grass as Falkirk swept aside Dundee United in the Championship battle. The 3-0 victory strengthened Falkirk's position in the play-offs, as they moved level with Morton in third place and nine points clear of Queen of the South in fifth.

MC - Ryan Jack (Aberdeen)
The midfielder showed terrific composure on the ball throughout Aberdeen's 1-0 win at Ross County, using his passing abilities to dictate the tempo of the game as Derek McInnes' side booked themselves a place in the Scottish Cup quarters.

ML - Sean Welsh (Partick Thistle)
The midfielder was pushed into an unfamiliar role of full-back but performed well as Thistle defeated St Johnstone to reach the next round. Welsh was involved in the game's only goal but he could feel unlucky not to have notched a pair of assists as Liam Lindsay twice went close from his crosses.

AM - Ryan McCord (Arbroath)
Arbroath were trailing at the interval in their Angus derby against Montrose but McCord's class helped turn the tables. The midfielder provided the assist for the equaliser before putting the visitors in front himself, as the Red Lichties went on to record a 3-1 win.

FC - Moussa Dembele (Celtic)
This week's star man. The Celtic striker made it an incredible six goals in two games – given he was a sub against St Johnstone and made way for Nadir Ciftci in this game, it's actually six goals in 123 minutes – as he put Caley Thistle to the sword, grabbing goals two, three and four.