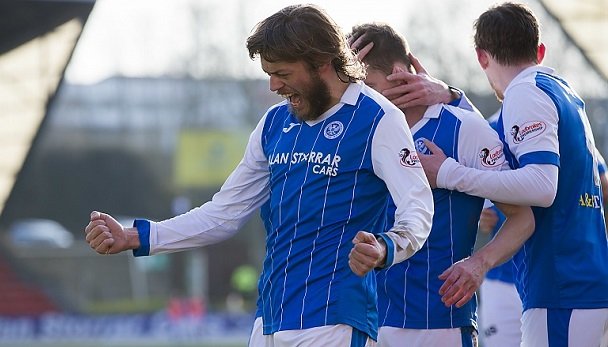 GK - Gary Woods (Hamilton Academical)
The goalkeeper more than made up for his error in the recent 5-3 defeat to Rangers, pulling off a stunning last-minute stop to deny Partick Thistle an injury-time equaliser as Accies held on for a 2-1 win.

DR - Ross McGeachie (Stirling Albion)
The right-back strolled it as the Binos defeated Clyde 2-1 at Forthbank. It was a meeting of the two form sides in Ladbrokes League 2 and Dave Mackay’s men made it five victories on the trot thanks to Peter MacDonald's winner.

DC - Mason Robertson (Peterhead)
The versatile star put in a terrific performance at the base of Peterhead's defence as Jim McInally's side closed the gap on Montrose at the top of Ladbrokes League 2. Robertson was an impenetrable shield as the visitors left Cowdenbeath with a 2-0 win.

DC - Steven Bell (Ayr United)
Originally signed to provide competition for places in midfield, it has been at centre-back where Bell has impressed recently. The former Stranraer man put in another top display, helping the Honest Men close the gap on League 1 leaders Raith Rovers to four points with a 3-0 win over Airdrieonians.

DL - Kieran Tierney (Celtic)
The Scotland international netted the all-important second goal as Celtic continued their recent dominance of this fixture with a 2-0 victory at Pittodrie. Tierney was his usual self, excelling in both attack and defence throughout the match.

MR - Josh Walker (Edinburgh City)
City recorded their biggest win of the season to take a step closer to another year in the SPFL next term with a thumping 4-0 triumph over Elgin City. Walker notched a goal and two assists as City moved 12 points clear of Cowdenbeath at the bottom.

MC - Murray Davidson (St Johnstone)
The midfielder scored the only two goals as Saints registered a home victory for the first time since September, comfortably sweeping aside Ross County at McDiarmid Park. In addition, Davidson put in a battling and dynamic performance in the engine room, helping to snuff out County attacks as effectively as he contributed to that of his own side. He is this week's star man.

MC - Greg Docherty (Rangers)
The January signing helped control the midfield battle as Rangers earned a comfortable 2-0 home win over Hearts. Docherty was trusted in the role despite Jason Holt returning from suspension, and he fully repaid his manager.

ML - Jordan Jones (Kilmarnock)
Aside from a terrific goal to bring Killie back into the game at 2-1, Jones was a constant thorn in the visitors' side as Hibs were forced to share the spoils in a thrilling match despite enjoying a two-goal lead at Rugby Park.

FC - Ryan Hardie (Livingston)
Another spot in Team of the Week for the on-loan Rangers striker as Livingston continued their terrific recent form with a 2-1 win over Dundee United on Friday night. Hardie netted an injury-time winner to put six points between Livi and their opponents in the Ladbrokes Championship play-off places.