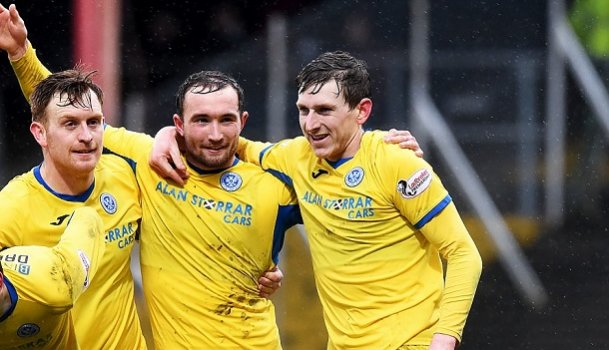 Craig Fowler selects his SPFL Team of the Week, with St Johnstone striker Chris Kane the star man for his two goals against Dundee.&nbsp;

Craig Fowler selects his SPFL Team of the Week, with St Johnstone striker Chris Kane the star man for his two goals against Dundee.

GK - Jack Leighfield (Queen of the South)
The 19-year-old made several good saves as Queens managed to escape Dumbarton with all three points to boost their play-off hopes. He was thankful for Kevin Nisbet's profligacy, though, as the on-loan striker blasted a second-half penalty high and wide.

DC - Xavier Tomas (Hamilton Accies)
The centre-back was imperious as Hamilton managed to secure a vital three points and bragging rights in the Lanarkshire derby with a 2-0 win over rivals Motherwell. Martin Canning's side are now four points clear of the relegation places with two games in hand.

DC - Thomas O'Brien (Arbroath)
The popular defender made an impact at both ends of the park as Arbroath defeated their rivals, and O'Brien's former club, Forfar 2-0 at Gayfield.

DC - Stephen Bronsky (Elgin City)
Another centre-back who made his mark in both penalty areas. The defender scored Elgin's second in the 3-0 victory over Berwick Rangers, a result which moved them to within a point of Stenhousemuir for the final play-off spot.

MR - Ryan Flynn (St Mirren)
The former Falkirk man put in his most impressive showing in a St Mirren shirt to date as the Buddies defeated Dunfermline 2-0 at the Paisley 2021 Stadium to move 11 points clear of second-place Livingston.

MC - Olivier Ntcham (Celtic)
In the cauldron of the derby, the French midfielder managed to show the required poise and composure on the ball to stand out from the crowd. His contribution helped Brendan Rodgers' side earn a 3-2 victory over Rangers despite playing the majority of the second half with 10 men.

MC - Mark Kerr (Ayr United)
The veteran campaigner rolled back the years with a dominant display as Ayr beat Raith Rovers 3-0 in the top-of-the-table clash in League 1. The Honest Men remain in second spot but are just one point behind with a game in hand.

ML - Dylan McGeouch (Hibernian)
Like Ntcham, the Hibs midfielder was another who managed to sparkle in the frenzied atmosphere of a derby game. His performance in a 2-0 victory over Hearts on Friday, combined with his excellent form all season, was rewarded with a place in Alex McLeish's Scotland squad.

FC - Lee Erwin (Kilmarnock)
It's taken the striker a while to truly find his feet but now Killie fans are starting to see the best of the ex-Motherwell man in blue and white. He scored again on Saturday, setting his side on their way to a 3-2 victory over Ross County; a win that was more comfortable than the scoreline suggests.

FC - Chris Kane (St Johnstone)
Kane found the back of the net twice as St Johnstone thumped Dundee 4-0 at Dens Park to ease any fears they could be dragged into the relegation scrap. He is this week’s star man.

FC - Andrew Nelson (Falkirk)
The Sunderland loanee thoroughly impressed in Saturday's 3-1 victory over Morton. Not only did he get on the scoresheet, his work rate and strength gave the visiting defence a torrid time throughout the 90 minutes.