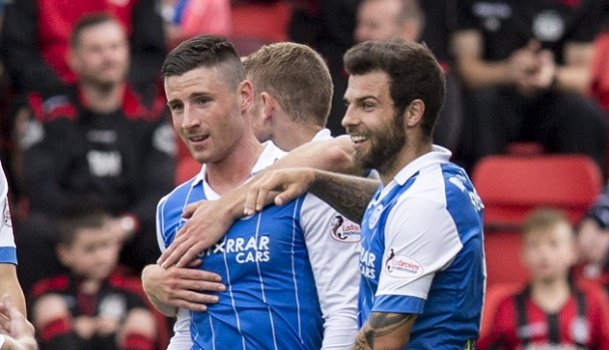 GK - Gary Woods (Hamilton Accies)
Accies may have eventually rolled over Dundee by a comfortable 3-0 scoreline but the visitors had plenty of chances to inflict damage on their hosts earlier in the match. Woods made two key stops from Scott Allan and Faissal El Bakhtaoui in the opening five minutes and a second-half denial of Marcus Haber stopped any chance of a fightback.

DR - Shay Logan (Aberdeen)
The right-back just seems to love playing against Ross County. Six of his 14 goals for the club have come against the Staggies, including the winning goal on Saturday. Rising at the far post, Logan headed beyond Scott Fox to ensure all three points would be going back to Pittodrie.

DC - Dougie Hill (Dumbarton)
Dumbarton are proving themselves a tough nut to crack in the Ladbrokes Championship so far this season, with back-to-back draws against promotion contenders Morton and Falkirk. It was the latter who were frustrated by the Sons on Saturday, as the away defence, marshalled by Dougie Hill, stopped the home side from adding to Myles Hippolyte's penalty, which cancelled out an early strike from Ally Roy.

DC - Niall Keown (Partick Thistle)
It's not very often we include players from a losing team, but anyone who watched Friday night football will know how deserving Keown is of a space in this team. Celtic dominated their match against Thistle but they were only one goal to the good going into the closing stages thanks to a superb performance from the Thistle back four, of which Keown was the stand out.

DL - Kieran Tierney (Celtic)
Though the left- back didn't have to do a whole lot in defence, and not surprisingly he handled anything that came his way with more than a degree of comfort, it was his forays forward which really stood out. In a match where a few of Celtic's attackers failed to hit their usual heights, it was Tierney who was the most consistent threat in the opponents’ half as the champions chalked up yet another win.

MR - Lewis Vaughan (Raith Rovers)
Rovers got their first win of the new Ladbrokes League 1 season thanks to a 3-0 victory over Stranraer. Despite having the firepower of Greig Spence and Liam Buchanan, two of the division’s highest scorers in recent years, it was Vaughan who stole the show. The 21-year-old netted twice and set up the other for Spence.

MC - Arnaud Djoum (Heart of Midlothian)
Like many of the Hearts first-team stars, Djoum hasn't been playing anywhere near his best in 2017. However, if Saturday's 1-0 win over Kilmarnock is anything to go by, he's starting to rediscover his old form. The Cameroon international shone in the centre of the park, including an outrageous bit of skill to set up Don Cowie for a late chance.

ML - Michael O'Halloran (St Johnstone)
The flying winger now has three goals in two league games after moving back to McDiarmid Park on loan from Rangers. And for each of his three goals he's dribbled past at least one opponent before firing the ball into the net, as he did twice in St Johnstone's 4-1 win over Motherwell. Just a shame about the penalty miss that robbed him of a hat-trick.

FC - Simon Murray (Hibernian)
Once more, the Hibs striker was excellent as Neil Lennon's side made it two wins from two to start the Ladbrokes Premiership season. Not only did Murray bag the equaliser at Ibrox, his running and movement off the ball was a source of worry for the hosts throughout as Hibs earned a 3-2 victory over Rangers.

FC - Darren Smith (Stirling Albion)
The striker netted twice as the Binos saw off Berwick Rangers to move top of the pile in Ladbrokes League 2. Smith got the scoring started with a stunning strike described as a ‘World Cup goal’ by Berwick boss John Coughlin before doubling his side's advantage on 35 minutes on the way to a 4-0 win.

FC - Connor Shields (Albion Rovers)
Arguably the most surprising result of the weekend, at least in the lower leagues, came in League 1 where Albion Rovers, fresh from a first week battering at the hands of Ayr United, inflicted similar punishment on Queen's Park. The undoubted star of the show in Rovers' 5-2 victory at Hampden was Shields, who netted twice in the second period to put the game beyond Gus MacPherson's men.