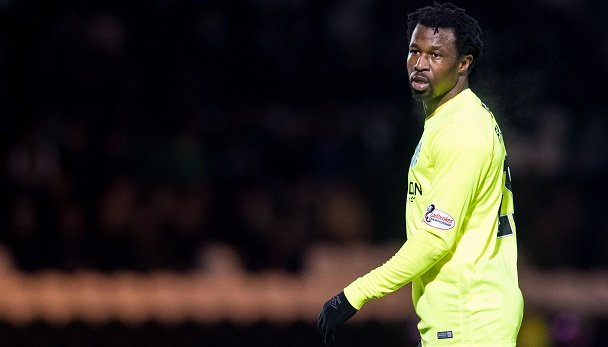 Craig Fowler selects his latest SPFL Team of the Week, with Hibernian defender Efe Ambrose the star man for his performance at Tannadice.

Craig Fowler selects his latest SPFL Team of the Week, with Hibernian defender Efe Ambrose the star man for his performance at Tannadice.

GK - Freddie Woodman (Kilmarnock)
The on-loan Newcastle goalkeeper made a few crucial stops as Kilmarnock picked up a vital three points away to Ross County. Pick of the bunch was a save from Alex Schalk's free-kick, which prevented County from quickly turning a 1-0 deficit into a 2-1 advantage.

DC - Clint Hill (Rangers)
The centre-back marshalled the Rangers defence brilliantly as the visitors held rivals Celtic to one goal and few clear-cut chances in the Glasgow derby on Sunday. At the other end, he showed the kind of predatory instincts usually reserved for a striker, converting the rebound following Emerson Hyndman's shot to earn Rangers a deserved point.

DC - Efe Ambrose (Hibernian)
The on-loan Celtic centre-back put in a flawless performance on Friday night as Hibs got the better of  Dundee United. The Nigerian was imperious at the heart of the defence, showing real composure and seemingly taking the ball from his opponents at will. He was undeniably the man of the match in Hibs' 1-0 win, and he's this week's star man.

DC - Jason Kerr (East Fife)
The Fife were able to upset League 1 leaders Livingston thanks to a stout defensive performance that saw them shut out their much-fancied hosts. Any of the backline could have been included in Team of the Week but Kerr, on loan from St Johnstone, gets the nod for influencing the game at the other end, netting the only goal.

MR - Sam Stanton (Dumbarton)
Industry off the ball, powerful running on it, invention, goalscoring and a menace to the opponent throughout. It's fair to say Sam Stanton had a strong afternoon as Dumbarton thumped Raith Rovers 4-0 at the Rock. The result put the Sons above their visitors, and five points clear of the relegation play-offs with only eight games remaining.

MC - Kenny McLean (Aberdeen)
The midfielder was the Dons' star man in the narrow 1-0 win over Motherwell. Derek McInnes' side had to be patient at Pittodrie but Niall McGinn's late goal extended their advantage in second place over Rangers to eight points.

MC - Don Cowie (Heart of Midlothian)
Cowie kept the captain's armband for the visit of Hamilton Accies on Saturday and his energetic performance in the centre set the tone for Hearts in what was a thoroughly dominant display by the hosts. He even picked up a cheeky assist by taking the indirect free-kick inside the box from which Esmael Goncalves fired in Hearts' second goal in the 4-0 win.

MC - Paul Paton (St Johnstone)
The midfielder opened the scoring with a close-range header after charging into the penalty area and, buoyed by his early goal, would go on to have a highly-productive afternoon at the centre of the St Johnstone midfield. Paton, along with midfield partner Liam Craig, dominated the central area as the hosts went on to defeat Dundee 2-0.

ML - Iain Russell (Airdrieonians)
The attacker pulled off an incredible strike to help Airdrieonians defeat Albion Rovers by a single goal in seven in a thrilling contest at the Exsel Group Stadium. Russell was integral to a lot of what Airdrie did in attack as Mark Wilson's side stopped a skid of three defeats on the bounce.

FC - Nathan Austin (Falkirk)
The Falkirk attacker netted twice and could have had another in the away side's 4-1 defeat of Ayr United on Saturday. The young hitman is finally getting up to speed, having made the jump from East Fife, starting the last three games and scoring in two of them.

FC - Kris Renton (Cowdenbeath)
Cowdenbeath, with new boss Gary Locke watching from the stand, scored a huge victory on Saturday, easily defeating Berwick Rangers to breathe new life into their ailing season. Striker Renton helped make the second goal with a powerful header the goalkeeper could only push into the path of Greg Ross. He then completed his side's scoring in the 3-1 win, latching on to a long ball before slotting past the keeper.