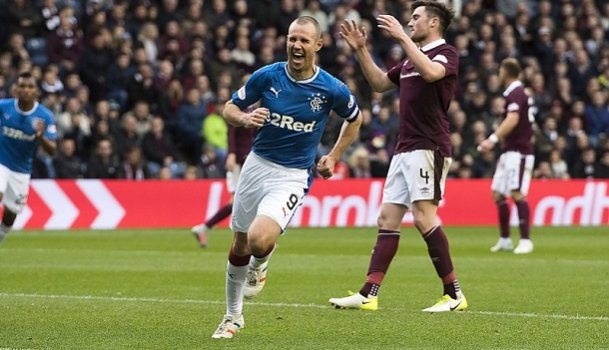 GK - Robby McCrorie (Berwick Rangers)
While Saturday's match may have been notable for a bizarre penalty concession by Cowdenbeath, the Borderers might not have got the chance to win it from the spot if it wasn't for a pair of excellent saves from their young on-loan Rangers goalkeeper.

DR - Jon Robertson (Alloa Athletic)
The lower-league veteran put in a shift down the right flank as Alloa Athletic defeated Queen's Park 4-0 to win their second game on the bounce and move to within two points of the play-offs.

DC - Paul Hanlon (Hibernian)
Following an impressive showing against Hearts in midweek, Hanlon was again a rock at the heart of the Hibs defence. Martin Boyle's first-half goal was enough for Neil Lennon's side to take all three points from their trip to Motherwell and Hanlon was named in the Scotland squad to face Holland.

DC - Jordan Piggott (East Fife)
Playing alongside the experienced Jonathan Page, the young Dundee loanee impressed at the heart of the defence as Darren Young's men moved into third place with a 3-1 win over Arbroath. The hosts had been trailing until three goals in the space of eight second-half minutes turned the game on its head.

DL - Callum Fordyce (Queen of the South)
The defender excelled in both full-back positions as Queen of the South defeated Falkirk 4-2 to keep pace with the sides in the play-off places. Fordyce started on the right before switching to the other side following an injury to Scott Mercer.

MC - Sam Stanton (Dundee United)
Managerless Dundee United got back to winning ways thanks to two goals from Stanton within the first 15 minutes in their 2-0 victory away to Dumbarton. The first strike, netted in the second minute, was right out of the top drawer.

MC - Scott Pittman (Livingston)
Another immense performance from the midfielder as Livingston rebounded from last weekend's disappointing loss at Dunfermline to reclaim second spot with a 3-2 victory over Brechin City.

MC - Dougie Imrie (Hamilton Accies)
Two excellent deliveries from the wing-back helped Hamilton Accies halt their recent slide with a 3-1 triumph away to Dundee. His first assist, a deep cross to Giannis Skondras to net the opener, was the pick of the two.

FC - Kenny Miller (Rangers)
It was preordained, wasn't it? Returning to the side, as captain no less, Miller scored twice and assisted the other as Rangers defeated Hearts in front of 33,000 spectators at Murrayfield. For his contribution to the match on his comeback, the 37-year-old is this week's star man.

FC - Miles Storey (Partick Thistle)
Storey's excellent run and calm finish was the difference against St Johnstone as Partick Thistle picked up their second win in a week to move out of the relegation places in the Ladbrokes Premiership.

FC - Connor Bell (Inverness Caley Thistle)
It's four league clean sheets in a row for Inverness CT, who are climbing the Championship table. On Saturday they made it two wins on the bounce with a 1-0 victory over Dunfermline - the goal coming courtesy of the impressive Bell.