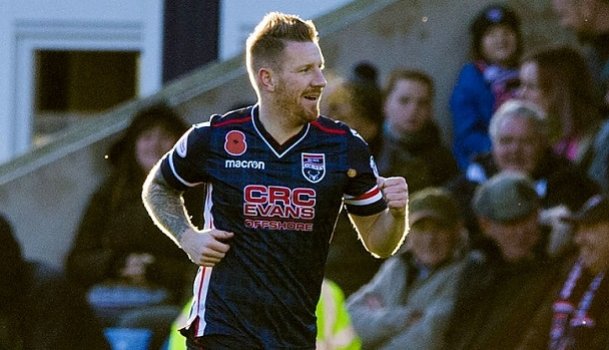 Craig Fowler names his latest SPFL Team of the Week, with Ross County&rsquo;s Michael Gardyne selected as this week&rsquo;s star.

Craig Fowler names his latest SPFL Team of the Week, with Ross County’s Michael Gardyne selected as this week’s star.

GK - Ofir Marciano (Hibernian)
The Israeli shot-stopper pulled off what could be the save of the season so far as Hibs defeated Dundee 2-1 at Easter Road. The game was still in the balance at 1-1 when Marciano showed incredible reactions to not only get down to Faissal El Bakhtaoui's drilled effort, but to push it away from goal.

DC - Mark Durnan (Dundee United)
The centre-back headed Dundee United into a first-half lead in their 2-1 victory over St Mirren and put in a solid defensive performance thereafter. The Tannadice side have now won their last two games and sit joint-top with Saturday's opponents in the Ladbrokes Championship.

DC - Kirk Broadfoot (Kilmarnock)
A robust display from the centre-back as Kilmarnock went to Murrayfield and left with all three points. Broadfoot was brought back following the arrival of Steve Clarke and he's barely put a foot wrong in his side's recent run of only one defeat in five games.

DC - Ross McCrorie (Rangers)
The youngster was preferred to Bruno Alves and he showed why, with a flawless showing in Rangers' 3-0 win over Partick Thistle. McCrorie sent them on the road to victory, showing great determination to get himself to Daniel Candeias' corner to power the hosts in front.

MR - Michael Gardyne (Ross County)
Having failed to previously find the net, Gardyne has now scored three times in his last two games, including a double in County's 3-2 victory over Motherwell at the weekend. With Gardyne finding form and Davis Keillor-Dunn continuing to impress on the other wing, manager Owen Coyle is starting to get real production from his wide players. Gardyne is this week's star man.

MC - Scott Brown (Celtic)
Brown captained Celtic to a new British record for the longest unbeaten domestic run in history. The sequence stretched to 63 games with the 4-0 win at St Johnstone and, as expected, Brown played a starring role, dominating the midfield area.

MC - David Templeton (Hamilton Accies)
Operating in the No 10 position, Templeton was a constant thorn in the side of the Aberdeen defence, scoring once and forcing several other chances with his direct play as Accies earned an impressive 2-2 draw against the high-flying visitors.

ML - Scott Sinclair (Celtic)
Sinclair put Celtic on their road to glory with the opening goal in Saturday's record-breaking win and continued to attack the St Johnstone rearguard throughout the 90 minutes.

FC - David Cox (Forfar Athletic)
The experienced lower-league forward came very close to a hat-trick on Saturday, scoring twice and seeing another effort end up in the back of the net, only for it to be (rightly) credited as an own goal by Albion Rovers defender Alan Reid. Still, it's three points that matter most, as Forfar's 4-3 win at Cliftonhill moved them off the bottom of the League 1 table.

FC - Lawrence Shankland (Ayr United)
Ayr United survived some considerable first-half pressure to romp to victory over Arbroath and move top of League 1 table on goal difference. Shankland helped them achieve that feat, scoring in each half of United's 4-1 away win to take his tally to nine goals in eight games.