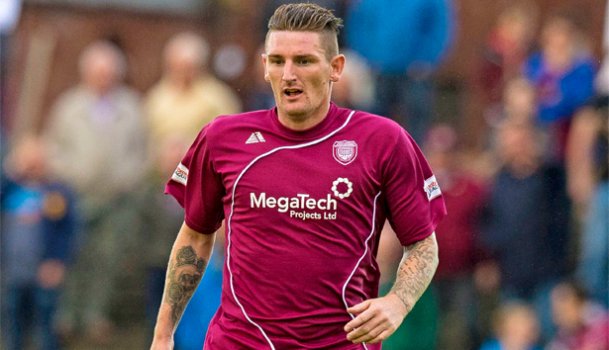 Craig Fowler of The Terrace Scottish Football Podcast explains his choices for SPFL Team of the Week, including Star Man Martin Scott.

Craig Fowler of The Terrace Scottish Football Podcast explains his choices for SPFL Team of the Week, including Star Man Martin Scott.

GK - Danny Rogers (Falkirk)
The goalkeeper made three good stops, including one stunning denial from John McGinn as Falkirk battled valiantly despite being reduced to 10 men midway through the first half against Hibs. They would eventually earn a 1-1 draw at Easter Road.

DC - David McCracken (Falkirk)
The biggest reason for Falkirk earning a share of the spoils at Easter Road was the performance of the defence. Despite being under considerable pressure, they were able to limit the amount of clear-cut chances Hibs had, forcing the hosts into trying pot shots from distance. Falkirk will look to use this result as a springboard for their season as they currently lie in fifth place.

DC - Mark Durnan (Dundee United)
The Dundee United charge keeps on going as the Terrors secured their passage into the final four of the IRN-BRU Cup, even though they rested several key first-team players for the game at Dunfermline. Of those who remained, centre-back Durnan continued his renaissance with another winning goal amid a solid performance and clean sheet.

DC - Gavin Gunning (Morton)
After winning a header late in Morton's win over Dumbarton, the centre-back let out a guttural roar in celebration. Though retaining his eccentricity, it's clear Gunning is enjoying his football again after a difficult second spell with Dundee United, as he put in another solid effort to help Morton win 2-0 against their hosts across the River Clyde.

MR - Martin Scott (Arbroath)
A dominating performance in the centre of the park and two goals as Arbroath produced the result of the weekend to defeat Clyde 4-0 at Gayfield. Following a slow start to the season, Arbroath are now starting to gain some momentum, with this victory moving them ahead of Clyde in the Ladbrokes League 2 table and up into third place. Scott is this week's star man.

MC - Marc Laird (Edinburgh City)
The former Manchester City youngster has been an inspired signing for City and he put in a stellar showing in the centre of the park as the Meadowbank-based club recorded their second consecutive League 2 victory. Edinburgh's ‘third club’ remain bottom of the table, but are now just two points from safety and only five points from the top half.

MC - John McGinn (Hibernian)
The 22-year-old caught the midnight flight back to Scotland after sitting on the bench during Scotland's defeat to England, and Hibs were sure glad to have him back as he put in an action-packed performance, including providing the assist in the 1-1 draw with Falkirk.

ML - Ryan McCord (Arbroath)
The second Arbroath player to make the side, McCord's range of passing was a big reason why the Red Lichties were able to be so dominant against Clyde. The former Alloa and Raith midfielder netted himself a rather eye-catching goal as well.

FC - John Sutton (St Mirren)
The experienced striker came through for his side when they needed it most, netting twice in the final 10 minutes as St Mirren came from behind to reach the semi-finals of the IRN-BRU Cup with a 2-1 win over Ayr United.

FC - Stephen Dobbie (Queen of the South)
Queen of the South had been struggling since knocking Linfield out of the IRN-BRU Cup in early October but got back on track with a 2-0 victory over Alloa Athletic in the same competition at Palmerston. The win for the managerless side was secured thanks to a double from Dobbie, proving further that he is this season's talisman.

FC - Ryan Wallace (Albion Rovers)
The flying forward continued his strong start to the campaign with a double in the 3-2 victory over Stranraer. It keeps the Coatbridge club on the coat-tails of Airdrieonians in the chase for the play-offs.