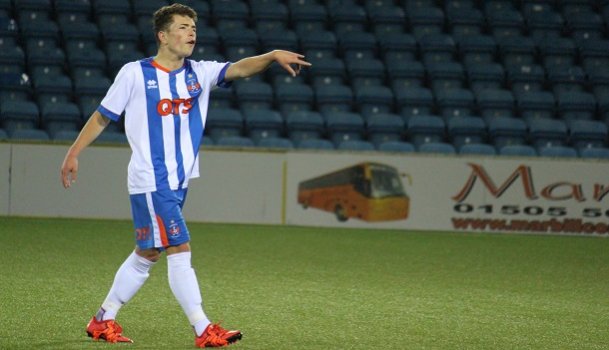 David Brockett casts his eye over Kilmarnock&rsquo;s Adam Frizzell in his latest scouting report from the SPFL Development League.

David Brockett casts his eye over Kilmarnock’s Adam Frizzell in his latest scouting report from the SPFL Development League.

Fresh from making his first-team debut in Kilmarnock’s 2-0 win over Inverness CT on Saturday, Frizzell played the full 90 minutes in Monday evening’s Development League clash at home to Falkirk, which the Bairns won 2-0.

Predominantly featuring as an attacking midfielder, the 17-year-old academy graduate is also comfortable operating on either flank to supplement the attack. Frizzell, who turned professional in the summer, has international experience, having played for Scotland at U16 and U17 level.

The pacy playmaker has speed and confidence in abundance, attributes Kilmarnock use to their utmost advantage. His quick feet, coupled with football intelligence and low centre of gravity, allows him to dribble and go past players with ease. While not the tallest or most physical player, his confident approach ensures he is difficult to defend against, winning seven fouls as a result.

Despite having just one Development League goal to his name this season, Frizzell’s awareness and anticipation will no doubt see him add to his account in the coming months. Although not employed as an out-and-out striker, his advanced position gives him the space to run into to create multiple openings for his team-mates. While occasionally used as a secondary striker, Frizzell’s slightly deeper position provides a more attacking outlet for the young Killie side.

Frizzell also has an impressive dribbling ability, and his willingness and direct style of play gave Kilmarnock impetus as they went in search of a third league win. Often comfortable receiving the ball in tight areas, Frizzell uses his acceleration and flair to evade markers. While a clear target for a long ball, he also carries the ball out of defence with ease. With an eye for a pass, the young forward is the orchestrator of many Killie attacks.

Twice capitalising on defensive errors, Frizzell’s high pressing game was thoroughly effective in putting opposition defenders under pressure. Unfortunate not to score, it is evident Frizzell’s commitment and work rate in closing down defenders will be rewarded during the course of the season. Perhaps surprisingly, he is adept at tracking back, twice seen in his own penalty area as a result.

Lastly, Frizzell’s movement – both on and off the ball – is that of a dynamic attacking midfielder. His positive mentality ensures he is always running at defenders, and is particularly clever when creating space for his team-mates. Stretching the Falkirk defence, he made a number of intelligent runs that were sure to have caught the eye of the watching Kilmarnock management team.

For Frizzell, last Saturday’s debut may pave the way for many more first-team appearances to come as Kilmarnock’s latest academy graduate makes the breakthrough.