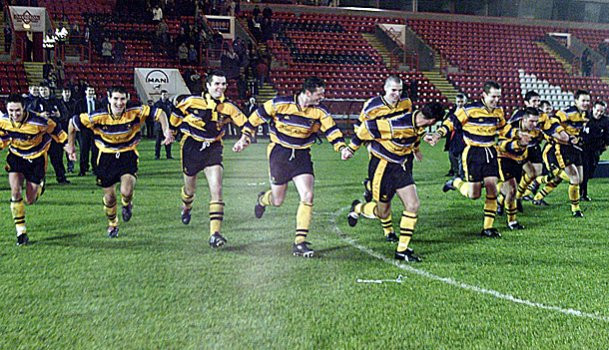 In the latest instalment of Talking Kit, Neil Sargent looks at how a return to their roots in 1999-00 inspired Alloa Athletic to the most successful season in their history.

There are many examples in football of teams who take their nickname from the design of their kit.

The same is true for Alloa Athletic, whose black and gold hoops gave rise to their nickname, the Wasps. For almost all of the first century of their existence, the club was defined by this design.

That changed in the early 1970s. In 1972 the club left their hoops behind in favour of more plain gold tops. For the best part of the next three decades their strips were relatively plain and featured only small pieces of black trim, rather than larger hoops. A couple of designs hinted at their hooped history - 1985 for example had two thin black stripes across the abdomen - but the waspish appearance of their kit largely disappeared.

In 1997, black returned as a prominent colour, with the addition of black sleeves, and in 1998 proper black stripes returned for the first time in 26 years, although they were vertical rather than horizontal.

By the time season 1999/00 rolled around, therefore, the Wasps hadn’t really looked like wasps for a generation. The club, though, was ready to return to tradition and in the summer of 1999 they unveiled their first full-hooped creation for 27 years.

It was manufactured by Yorkshire sportswear company Pendle, (who still produce Alloa’s strips to this day) and was sponsored by local newspaper the Alloa Advertiser. As well as the black and gold hoops, the kit included three thin white stripes which sat underneath the three larger black ones.

Returning to their roots off the pitch inspired Alloa to the most successful season in the club’s history.

Managed by Terry Christie (nicknamed the Duffle Coat after his choice of touchline attire), the club won their first ever trophy as they beat Inverness Caley Thistle 5-4 on penalties, after a thrilling 4-4 draw, to clinch the Challenge Cup at Airdrie’s Excelsior Stadium.

They added to this success by finishing runners-up in the Second Division, winning promotion to the First Division for the first time in 10 years.

Their Scottish Cup run would also go down as one of the best in living memory. After narrowly avoiding an upset of their own by seeing off non-league Whitehill Welfare at the second attempt, the Wasps held Premier League Kilmarnock to a 0-0 draw at Rugby Park before knocking them out with a famous 1-0 win at Recreation Park.

Their reward was a home tie against Dundee United. Alloa raced into a 2-0 lead before half-time but their top-flight opponents struck back in the second half to force a replay at Tannadice. Alloa’s great run was finally ended with a 4-0 defeat in the City of Discovery, but their giant-killing exploits would live long in the memory.

1999/00 was also notable as the last season in professional football for former Celtic and Motherwell legend Andy Walker, who made 13 appearances for Alloa, and scored three goals, before announcing his retirement from a career that spanned 16 years. Walker bowed out in style, scoring twice on the last day of the season as the Wasps beat Queen of the South 6-1 at Recreation Park.

Alloa haven’t quite remained faithful to the hoops since then, leaving them off their kit again between 2004-06 and 2012-13 but, since 1999, nine of their 11 kits have included the ‘wasp’ design that continues to define them to this day.