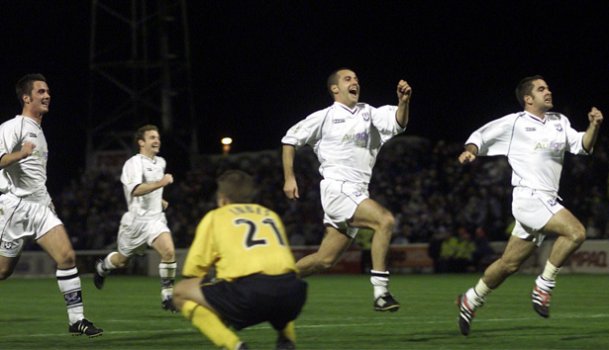 Ayr United are often referred to as a sleeping giant in Scottish football.

Season 2001/02, which included a First Division promotion push, a first ever major national cup final and a legendary Scottish Cup run, was the season when the giant threatened to awake from its slumber.

Manager Gordon Dalziel had been in charge at Somerset Park since 1995 and, after a gradual increase in investment over the years, Ayr had started to challenge for promotion to the Scottish Premier League under his guidance. The season before had seen United finish second behind big-spending Livingston, and they went into the 2001/02 campaign as many people’s favourites to go up this time around.

The kit for the campaign was all white with subtle black trim and was manufactured by TFG, who made all of Ayr’s kits between 1999 and 2007. The kit was sponsored by Aurigin, although the shirt sponsorship changed to Barr Construction - owned by Ayr United chairman Bill Barr - for the League Cup Final which was to come in March.

Impressive wins against Falkirk and Ross County in the opening two league games seemed to suggest that this could, after all, be the Honest Men’s year. However, between then and Christmas their league form was erratic, leaving them with ground to make up in the title chase.

In the cup competitions, however, they were unstoppable. A 3-1 away win against fellow First Division side St Mirren in the first round of the League Cup set up a mouth-watering derby against Premier League rivals Kilmarnock at Somerset Park. Despite being reduced to 10 men in the first half, Ayr battled their way to a goalless draw and then penalties, where they triumphed 5-4 to seal a famous night under the lights.

From there they thrashed First Division Inverness CT 5-1 in the quarter-finals to earn a semi-final at Hampden Park against Franck Sauzee’s Hibernian. Eddie Annand’s penalty in the 11th minute of extra time gave United a 1-0 win and sent them through to their first ever national cup final.

On Sunday March 17, 2002, Ayr took on Rangers in the League Cup final in front of more than 50,000 fans at Hampden Park. They ultimately lost the match 4-0, but the scale of their achievement was there for all to see, and the outcome might have been different had Stefan Klos not denied McLaughlin with a fine save while the scores were still tied at 0-0.

In the Scottish Cup, Ayr repeated their heroics, thrashing Premier League Dunfermline 3-0 before knocking out Dundee United after a replay. Another Hampden visit followed - their third of the season - and there was no shame in the eventual scoreline, a 3-0 defeat to Martin O’Neill’s Celtic which came courtesy of goals from Alan Thompson and Henrik Larsson.

Despite their cup brilliance, Ayr’s failure to achieve promotion again at the end of the season ultimately led to the exit of Gordon Dalziel in the summer, after they finished third behind Partick Thistle and Airdrie. He was replaced by Campbell Money, but Ayr have never again matched the achievements of the class of 01/02 in the years since his departure.