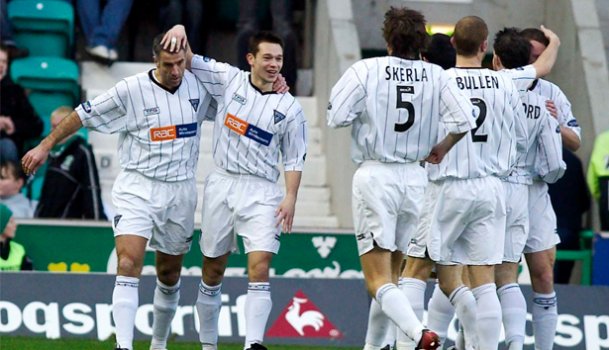 In this week&#39;s Talking Kit, Neil Sargent delves into Dunfermline Athletic&#39;s successful season of 2003/04 and looks at the strip&nbsp;worn by Jimmy Calderwood&#39;s men that year.

The early 2000s was one of the most successful periods in the recent history of Dunfermline Athletic.

Three national cup finals, European football and their best league finish for half a century contributed to a golden era at East End Park. Of all the seasons under Jimmy Calderwood, though, 2003-04 stands out as the most memorable.

Calderwood had taken over from Dick Campbell in January 1999 and guided the team to second place in the First Division, securing promotion back to the top flight at the first attempt. In 2002-03, Dunfermline finished fifth in the SPL, their highest placing since 1969, but the scene was set for the following season to be even more successful.

Going into the campaign, the club launched a new kit in their customary black and white colours. Manufactured by TFG Sports and sponsored by RAC Auto Windscreens, the design was overwhelmingly white, including white shorts and socks, with black pinstripes and black trim on the top. It was almost identical to the strip worn by the team between 1990-1992, when they reached the League Cup final against Hibernian, except the earlier version had black rather than white shorts.

On the pitch, Calderwood had assembled a team that featured a number of internationals, including Stevie Crawford, Barry Nicholson and Andrius Skerla.

Crawford scored 17 goals for the Pars over the season and was a regular for Scotland, featuring in matches against the Faroe Islands, Lithuania, Holland, Romania, Estonia and Trinidad and Tobago.

Lithuanian defender Skerla was well on his way to becoming his country’s most-capped player, while Nicholson made the last of his three international appearances for Scotland during a 4-1 defeat to Sweden at Easter Road in November 2004. Striker Noel Hunt, who was then just starting out in his professional career, would subsequently go on to play international football for the Republic of Ireland.

Also on the books at East End Park was veteran hitman Craig Brewster, whose partnership with Crawford was one of the most fruitful in the club’s recent history.

Calderwood guided the team to the Scottish Cup final in May but they lost 3-1 to Martin O’Neill’s Celtic, despite leading 1-0 at half time thanks to a goal from Skerla.

In the league, the team achieved some memorable results on their way to their highest league finish for more than four decades, including a 2-0 victory over Rangers at East End Park in December and a 2-1 win at Celtic Park in May.

The fourth-place finish secured European football and a crack at the UEFA Cup the following season - their first experience of European football since losing on away goals to Anderlecht in the Inter-Cities Fairs Cup in 1969.

2003-04 was to be Calderwood’s last season at East End Park, departing in the summer to join Aberdeen where he spent five successful seasons. It was testament to everything he had achieved at Dunfermline that over the next few seasons he took a large chunk of his 2003-04 squad north with him, including Crawford, Brewster and Nicholson, as well as Richie Byrne, Gary Dempsey and Derek Young.