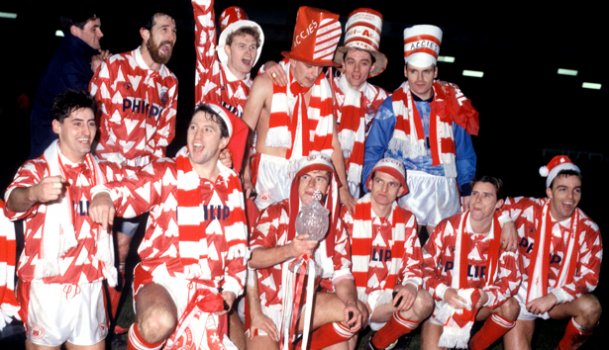 In the late-1980s, Hamilton Accies were the ultimate yo-yo team.

Promoted to the top flight as champions in 1986, they were immediately relegated in 1987. Promotion as champions followed again in 1988, only to end in relegation again in 1989. Two consecutive sixth-place finishes in the First Division consolidated their position, before they were once again ready to mount a title challenge in 1991-92.

The season would turn out to be a memorable one for several reasons, not least for the kit that the team wore. A dizzying design of red and white triangles created a wave effect that embodied the most striking elements of garish 90s' fashion.The kit was sponsored by Dutch tech giants Phillips who had a factory in the town, and was manufactured by English sportswear company Matchwinner.

The club was managed by Billy McLaren, a former defender whose career had taken him to eight different Scottish clubs, most notably Queen of the South and Hibernian. On the books as a player was former Celtic and Aberdeen star Billy Stark and future Accies gaffer Billy Reid.

Back in season 1991-92 the First Division looked quite different to today. It was made up of 12 teams and used the old points system of two for a win and one for a draw. It also included both Clydebank and Meadowbank Thistle - names which have subsequently been lost to the senior game. To be promoted, Accies would need to finish in the top two.

They began the season with a 2-2 draw at Montrose, a result which set the tone for an opening spell that saw them draw five of their first nine games. Four wins out of six in October pushed them on, and by November they were in second, where they stayed for more than two months.

It wasn’t only in the league that Accies were flying. In December they met Ayr United at Fir Park in the final of the Scottish Challenge Cup in front of almost 10,000 fans. A single goal from striker Colin Harris gave them a 1-0 win and secured a first ever cup victory in the club’s history.

Back on league business they became embroiled in an epic title race involving themselves, Dundee and Partick Thistle. Between February and the end of the season there was never more than five points separating all three teams, and with just two matches to go Hamilton sat one point behind both Thistle and Dundee, who were tied on 56 points apiece.

On the second-last weekend, Thistle lost at home to Meadowbank, but Accies also lost at home to Kilmarnock, leaving Dundee two points, and five goals, clear at the top and almost certain to secure the championship. That left Thistle and Accies one point apart and battling for the final promotion place.

On a dramatic last day, Accies beat Meadowbank 2-0 at Douglas Park, but Thistle held out for a nerve-jangling 0-0 draw at home to Forfar, meaning they took the final promotion place by a margin of just two goals.

It was heartbreak for McLaren and his men, but a season to be proud of nevertheless, and a first ever national trophy to proudly take its place in the trophy cabinet.