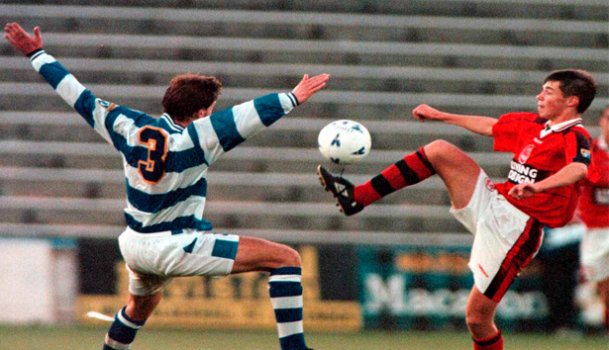 As Aberdeen and Morton prepare to go head-to-head in the Betfred&nbsp;Cup semi-final at Hampden Park on Saturday, Neil Sargent looks back at a classic League Cup encounter between the sides and examines the story behind the kits that both sides wore on the day.

As Aberdeen and Morton prepare to go head-to-head in the Betfred Cup semi-final at Hampden Park on Saturday, Neil Sargent looks back at a classic League Cup encounter between the sides and examines the story behind the kits that both sides wore on the day.

Tuesday 3rd September, 1996. Premier Division big guns Aberdeen are cruising to a comfortable 2-0 victory over First Division Morton at a packed Cappielow in the Coca-Cola Cup third round. Billy Dodds, whose form has put him on the verge of a first Scotland cap, has scored twice and with just 13 minutes remaining the tie looks safe.

Then, from nowhere, something incredible happens. John Inglis trips Paddy Flannery in the box and Derek Lilley converts from the spot to give his team a lifeline. Just seconds later the game is all square when John Anderson drills home from 16 yards and, with Aberdeen reeling, the turnaround is completed three minutes from time when Lilley nets his second of the game to send the home crowd wild.

But the drama isn’t over yet. Aberdeen race straight up the park and Peter Cormack brings down Joe Miller in the box. Penalty! Dodds steps up to complete his hat-trick and send the game into extra time.

That alone might have been enough to qualify the match as a classic, but there is more to come. In an unforgettable 13-minute spell in extra time Dean Windass, Aberdeen’s enigmatic talisman, finds the net FOUR times to give the Dons a stunning 7-3 win and secure a quarter final tie against Dundee at Dens.

The story of the kits involved in that classic night is as interesting as the match itself.

Aberdeen’s kit for the 1996-97 season broke with recent tradition. It was the first Dons home kit to have white shorts since season 1965-66, and the first to have hooped socks since 1934-35, when the team still wore black and gold.

Manufactured by Umbro for the ninth consecutive season, and sponsored by Glasgow-based home improvements company Living Design, the top had black trim along the sleeves and across the midriff, while closer inspection of the body of the kit revealed subtle red stripes.

For the first time in the club’s history, the badge was positioned in the centre of the kit rather than on the left breast which had been customary until that point, giving the design a rather busy - some might say cluttered - appearance.

While the kit represented a change from the norm for the Dons, the first-team squad had also had a facelift. Roy Aitken’s activity in the transfer market had given the fans much cause for optimism.

Bulgarian duo Illian Kiriakov and Tsanko Tsvetanov had been stars for their country at both World Cup 94 and Euro 96, while French defender Antoine Kombouare (who made his debut for the club in the Morton match and was named as captain) joined after a trophy-laden spell with Paris St Germain.

Apart from a surprising defeat to Latvian side Zalgiris Vilnius at Pittodrie in the UEFA Cup, the Dons had started the season brightly. A 4-1 away win in the Latvian capital ensured they still progressed to the next round, while domestically they were unbeaten, having drawn with Celtic and Motherwell and thrashed Hearts 4-0. The League Cup tie with Morton had been secured following a comfortable 2-0 win over Queen’s Park at Hampden.

First Division Morton had also started the season well, winning two of their opening three league matches and seeing off Second Division Hamilton Accies in the cup to set up the match with Aberdeen.

The Greenock team were playing in their traditional blue and white hoops for the first time since 1989, having experimented in the intervening years with a series of unorthodox designs including all white with a blue sash, tartan, horizontal stripes and a rather wacky, zig-zag, ‘wallpaper’ design.

This time, though, even the socks were hoops, as if to compensate for the previous seasons’ departure from convention. In all the seasons since, Morton have only released one strip that didn’t feature blue and white hoops (2016-17), and it was withdrawn and replaced before the season started following a poor response from the fans.

The 1996-97 team included Finnish cult heroes Marko Rajamaki and Janne Lindberg, as well as stalwarts like John Anderson, Derek Lilley, David Wylie and Warren Hawke who, between them, racked up more than 1,000 appearances for the club.

While the match with Aberdeen became an instant classic, neither team was able to maintain much momentum from it in the months that followed. The Dons exited the competition after a 2-1 defeat to Dundee in the next round, and finished the season in sixth place in the Premier Division. Morton finished eighth in the First Division, avoiding relegation comfortably but losing more matches than they won.

If Saturday’s match at Hampden reproduces even a fraction of the drama of that memorable night in 1996, however, then we are in for a treat!