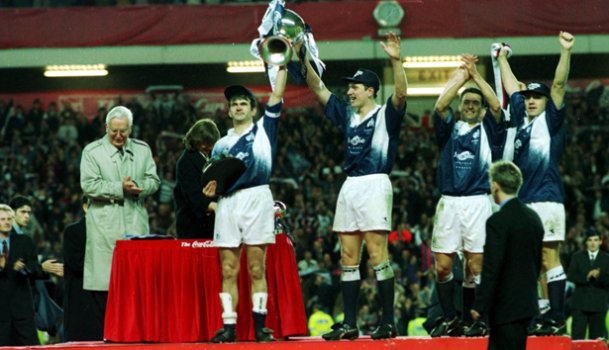 Neil Sargent jumps back to 1994/95 and talks us through Raith Rovers&#39; most successful period, focusing on the famous kit that the Rovers wore in their 1994&nbsp;Coca-Cola Cup triumph.

The mid-1990s was the most successful spell in the history of Raith Rovers FC.

Having started the decade without a trophy to speak of for more than 40 years, the club picked up three of them in just three years and famously took on German giants Bayern Munich in the UEFA Cup, where for a few glorious minutes they held a 1-0 lead in the Olympic Stadium.

Arguably the highlight, though, was 1994’s Coca-Cola Cup win over Celtic at Ibrox Stadium - the club’s first ever triumph in a national competition.

The fairytale started in 1992/93 when Rovers, managed by former Manchester United and Rangers star Jimmy Nicholl, won the First Division title by 11 points from second-placed Kilmarnock.

It was their first piece of silverware since 1949 and gave them a crack at the top flight for the first time in more than 20 years, but their stay was brief and they were relegated back to the First Division after just one season.

As the 1994/95 season swung into action, few could have predicted the incredible success that the side would achieve.

The campaign had approached with little fanfare. The club’s Diadora kit remained identical to the one they had worn during the previous season in which they were relegated, except for a change of sponsorship from Kelly’s Copiers to local nightclub Jackie O’s.

The design consisted of a triangular ‘sash’ of Rovers’ traditional dark blue, bordered on both sides by large panels of white which were ‘splashed’ with a fading blue. The shorts and socks were both white, as they were for the majority of the 1990s and 2000s.

Rovers started the season in solid if not spectacular form, drawing six of their opening nine league matches. As 1994 ended and 1995 began, however, they kicked into top gear and started a charge towards the title.

From Boxing Day until the end of the season, Rovers lost just once in the league, going on a 14-match unbeaten run that included a spell of seven consecutive wins at the start of the year, only ending in the middle of April when Airdrie won 1-0 at Stark’s Park.

Their form catapulted them to the top of the league and, with just two matches remaining, they had a three-point lead over second-placed Dunfermline. The Pars, though, still had to visit Stark’s Park and had a considerably better goal difference than Jimmy Nicholl’s men, meaning that everything was still up for grabs.

On May 6, 1995, the sides played out a tense goalless draw which meant Rovers retained their three-point advantage going into the final match of the season. With an inferior goal difference, though, they knew that a defeat at Hamilton coupled with a Dunfermline victory over Clydebank would still be enough to send the title along the road to their Fife rivals and force them into a promotion play-off match with Aberdeen.

One week later Rovers battled to a nail-biting 0-0 draw at Douglas Park, clinching the championship and promotion back to the Premier Division despite Dunfermline’s 2-1 win at East End Park.

Despite this success, though, the season will always be remembered for Rovers’ stunning triumph in the Coca-Cola Cup final against Celtic.

After comfortably disposing of Third Division Ross County 5-0 in the first round, they knocked out Premier League Kilmarnock 3-2 at Stark’s Park before beating fellow Division One side St Johnstone 3-1 in Perth. That set up a semi-final with First Division Airdrieonians which, coincidentally, would also be played at McDiarmid Park. The match ended 1-1 after extra time but Rovers held their nerve in the shoot-out to progress to the final 5-4 on penalties.

The showpiece against Celtic was played at Ibrox Stadium as Hampden Park was being redeveloped. Celtic, without a trophy to their name for five years, were overwhelming favourites to end their barren spell, but Stevie Crawford fired the Kirkcaldy men ahead after just 19 minutes.

Andy Walker levelled before half-time and, with just six minutes remaining, Charlie Nicholas struck to put Celtic on the verge of victory. Two minutes later, though, Rovers were level again as Gordon Dalziel headed in a rebound to send the match into extra time.

No further goals followed and the match went to penalties. With the score at 6-5 to Rovers, Scott Thomson saved from Celtic captain Paul McStay and one of the most unlikely cup upsets was complete.

The match against Bayern that followed the next season will live in Scottish football folklore forever, but the story of how they got there will also continue to be retold in households across Kirkcaldy for decades to come.