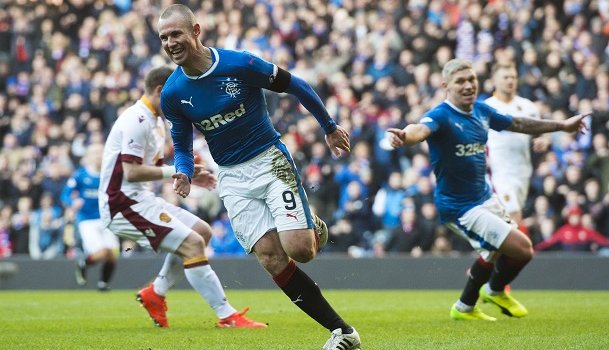 Craig Fowler selects his latest SPFL Team of the Week, with Kenny Miller the star man after his late double knocked Motherwell out of the Scottish Cup.

Craig Fowler selects his latest SPFL Team of the Week, with Kenny Miller the star man after his late double knocked Motherwell out of the Scottish Cup.

GK - Billy O'Brien (St Mirren)
The Manchester City loanee was put straight into the St Mirren starting XI and enjoyed a debut to remember as the Buddies pulled off the shock of the Scottish Cup fourth round to dump Dundee out of the competition. They would eventually coast to a 2-0 win but O'Brien played a key role, especially in the first half, with a couple of great stops.

DC - Jonathan Page (East Fife)
The consistent centre-back put in another fine performance as East Fife upset the hosts to eliminate Livingston at the Tony Macaroni Arena. The visitors won 1-0, defeating Livi for the third time in four games this season.

DC - Jean-Yves M'Voto (Raith Rovers)
The towering defender put in another imperious performance as Raith Rovers kept themselves in the Scottish Cup with a last-minute Declan McManus goal rescuing a draw against Hearts. The visitors enjoyed their fair share of possession, but struggled to break down Rovers' defence as M'Voto and partner Kyle Benedictus enjoyed stellar afternoons.

DC - Massimo Donati (Hamilton Accies)
A classy display from the veteran Italian as he returned to the heart of the Accies defence for their trip to Kilmarnock at the weekend. The visitors limited opportunities for Killie before they booked themselves a place in the next round courtesy of an injury-time Rakish Bingham penalty.

MR - Dom Thomas (Queen of the South)
The on-loan Motherwell winger enjoyed a terrific Saturday as his two goals secured victory for Queen of the South at Dumbarton in the Championship. The Doonhamers are now unbeaten in four league games, three of which, including last week's 3-3 draw at Tannadice, have come with Thomas in the starting XI since his move from Fir Park.

MC - Nat Wedderburn (Dunfermline Athletic)
Wedderburn has been in excellent form since being installed in the centre of the Dunfermline midfield, and he controlled the game from that area as the Pars raced into a 3-0 lead before holding on to a 3-2 win in their fourth-round tie at Alloa Athletic.

MC - Christopher Routis (Ross County)
Ross County blew away Dundee United by a 6-2 scoreline on a Saturday, with Routis grabbing a double, including a terrific opening strike. The influential midfielder managed to bounce back from an error, which enabled Tony Andreu to make it 4-2 before half-time, netting again in the second half to secure County's passage.

ML - Scott Sinclair (Celtic)
The winger ran riot down Celtic's left-hand side as the Scottish champions and current leaders defeated Albion Rovers 3-0 to reach the fifth round. With Kieran Tierney joining him on the flank after the young left-back's return from injury, Sinclair netted the first with a spectacular strike and continually terrorised his League 1 opponents.

FC - James Keatings (Hibernian)
The Scottish Cup holders enjoyed a thoroughly dominant beginning to their defence of the trophy as they defeated Bonnyrigg Rose 8-1 at Tynecastle. Keatings bagged two goals on a ground he used to call home, and he'll be looking to do so again next month if Hearts defeat Raith Rovers to set up an Edinburgh derby in the fifth round.

FC - Kenny Miller (Rangers)
Rangers were on the brink of elimination until Miller's heroics not only saved them from an early exit, but carried them through to the next round in dramatic fashion, as the striker netted twice in the last six minutes to earn a 2-1 victory over Motherwell. The striker continues to shine at the age of 37 and has been the Ibrox club's most dependable attacker, and arguably their best player, this season. He's this week's star man.

FC - Dylan Nguene Bikey (Stirling Albion)
The French striker took his tally to nine goals in nine games for Stirling Albion after a brace in their 2-2 Scottish Cup draw with Clyde. Peter MacDonald struck twice and also missed a penalty after Bikey had given the hosts the lead. The ex-Dieppe man popped up late on to force a January 31 replay, although he looks likely to have moved on by then.