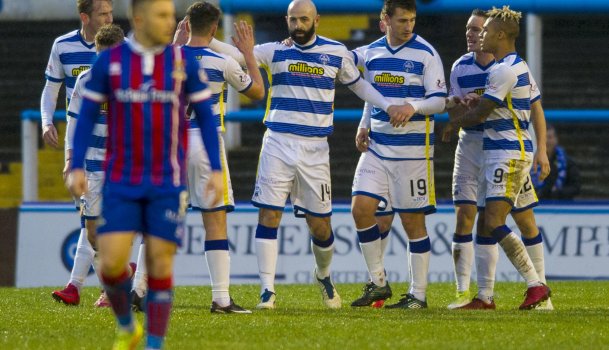 GK - Trevor Carson (Motherwell)
Motherwell would have lost their fifth league game on the bounce were it not for the heroics of their goalkeeper. Carson pulled off a terrific, late one-handed stop to deny Josh Meekings and Dundee in the 1-1 draw at Fir Park.

DC - Niall Keown (Partick Thistle)
Nobody made a bigger contribution at both ends of the park than the Thistle centre-back this weekend. After denying Greg Docherty a sure-fire goal with a last-ditch block, he then scored the only goal of the game as the Firhill side defeated Hamilton to move off the bottom.

DC - Iain Davidson (Raith Rovers)
Another imperious performance from the midfielder moving into his makeshift centre-back role. Rovers were able to grind out a 2-1 victory at Arbroath which, coupled with Ayr's defeat to Airdrieonians, pulled them within five points of the Honest Men at the top with two games in hand.

DC - Matty Allan (Montrose)
Montrose retained their six-point gap at the top of League 2 while ensuring previous table-toppers Stirling Albion made it five games without victory following this 1-0 triumph at Forthbank. Gary Fraser grabbed the game's only goal but it was Matty Allan who shone brightest with an accomplished centre-back showing.

MR - Michael Paton (Dunfermline Athletic)
The midfielder has missed a significant chunk of the season through injury but appears to be finding his form with a star turn in Dunfermline's 2-1 victory over Brechin City. Paton would net what proved to be the winning goal shortly after half-time.

MC - Olivier Ntcham (Celtic)
Celtic extended their lead at the top of the Ladbrokes Premiership to eight points with a 3-0 victory over Aberdeen. Olivier Ntcham gets the nod for an impressive display which saw him net the third goal, though Jonny Hayes, Scott Brown and Kristoffer Ajer also received serious consideration.

MC - Dean Cairns (Airdrieonians)
Airdrie managed to break Ayr's unbeaten streak with a 2-0 victory at the Excelsior Stadium, which moved them to within two points of the play-off places. With several star performers in the side we've gone for the young midfielder who battled hard in the centre of the park.

MC - Gary Harkins (Morton)
Harkins netted the game's only goal from the penalty spot as Morton defeated Inverness CT 1-0 at Cappielow but he would have scored a couple more had it not been for some fine stops from Mark Ridgers. Aside from his threat around the penalty box, Harkins impressed with his composure on the ball and passing abilities. He is this week's star man.

ML - Paul McMullan (Dundee United)
The winger netted twice as United recorded a fine 3-0 victory over fellow promotion contenders Livingston to keep them within touching distance of St Mirren at the top of the Ladbrokes Championship table.

FC - Kris Boyd (Kilmarnock)
The striker netted twice against his old club Rangers as Kilmarnock kept up their tremendous recent form to move into the top six. Youssouf Mulumbu also excelled for the Rugby Park side and just missed out on a place in this team.

FC - Anthony Stokes (Hibernian)
The attacker was involved in just about every move for Hibs as they defeated Ross County on Saturday, returning to winning ways just in time for the Edinburgh derby. Stokes scored the equaliser for the hosts in the 2-1 win and later played one of the passes of the season to set up a chance for Martin Boyle.