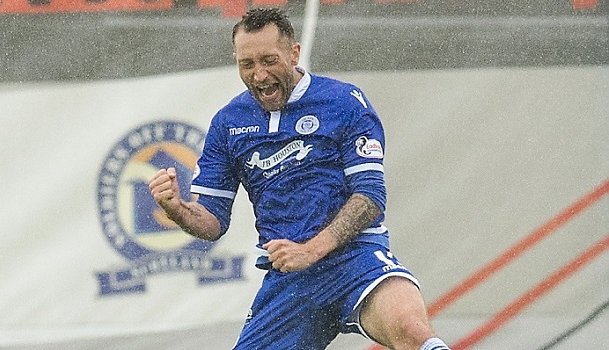 Craig Fowler selects his latest SPFL Team of the Week, with Queen of the South striker Stephen Dobbie the star man in an attack-minded 4-3-3!

Craig Fowler selects his latest SPFL Team of the Week, with Queen of the South striker Stephen Dobbie the star man in an attack-minded 4-3-3!

GK - Marc Waters (Elgin City)
Arguably the shock of the IRN-BRU Cup second round came at Borough Briggs where League 2 Elgin City defeated League of Ireland side Bray Wanderers. The visitors managed 11 shots on target but couldn’t force the ball past Waters, as Jim Weir’s men ran out 2-0 winners.

DR - David Raven (Inverness Caley Thistle)
The right-back got on the scoresheet with an excellent finish from outside the area as ICT comfortably defeated Aberdeen's Colts at Glebe Park. The 4-2 scoreline actually flattered the Dons, with Inverness putting the game out of reach when Raven found the top corner in the 40th minute.

DC - Conrad Balatoni (Falkirk)
The ex-Partick Thistle and Kilmarnock centre-back brought some physicality to the Falkirk backline on his debut as Peter Houston's side defeated Sligo Rovers 2-1 to book their place in the third round.

DC – Mason Robertson (Peterhead)
The Blue Toon had conceded four goals in the first half of the previous week’s game against Stirling Albion but Robertson helped them shut out League 2 rivals Annan at Balmoor.

DL - Lewis Martin (Dunfermline Athletic)
The defender put in a good shift, getting up and down the left-hand side, as Dunfermline defeated Buckie Thistle 3-0 – it would have been more but for some heroics from the goalkeeper.

MC - Lewis Vaughan (Raith Rovers)
Another two goals for a player who has been on fire this season, with 13 goals in nine games. His first, a thunderous free-kick, was particularly impressive as Rovers blew away Ross County's U20s 4-0 at Stark's Park.

MC - Aaron Splaine (Dunfermline Athletic)
The former Kilmarnock midfielder was a stand-out as Dunfermline defeated Buckie Thistle. Playing a number of through balls behind the opposing defence, Splaine was instrumental in keeping the Highland League side on the back foot.

MC - Dimitris Froxylias (Dumbarton)
A debut to remember for the new signing from Cyprus. After 119 punishing minutes against Welsh side Connah's Quay Nomads, Froxylias sealed a 2-1 home win with a tremendous free-kick.

FC - Patrick N'Koyi (Dundee United)
The striker impressed in attack as Dundee United left it late to defeat Alloa Athletic 3-1 in their second-round tie. N'Koyi opened the scoring from the penalty spot and set up Paul McMullan to fire in the decisive goal a minute into stoppage time, before Willo Flood made sure of the win.

FC - Gavin Reilly (St Mirren)
Another couple of goals for the striker who netted twice against his old club (sort of) as St Mirren saw off Hearts Colts 3-1 at the Paisley 2021 Stadium.

FC - Stephen Dobbie (Queen of the South)
The striker was his side's stand-out once again as Queens advanced past Berwick Rangers thanks to a thumping 5-0 win. Dobbie netted twice and, at times in the second half, was simply unplayable as he continued to drive through the home defence. This week's star man.