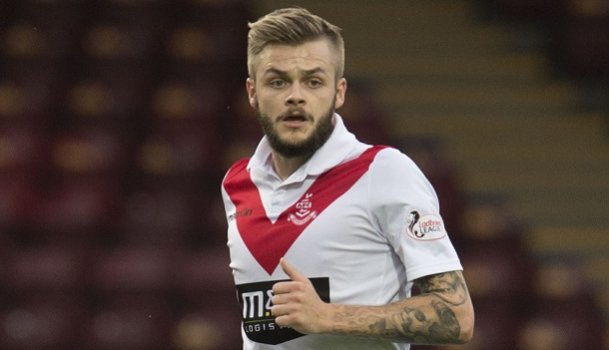 GK - Alex Mitchell (Annan Athletic)
Arbroath won the Ladbrokes League 2 title without having to defeat Stirling Albion in the final game of the season. Forfar Athletic, who led for so long, needed to beat Annan to stand a chance but could not do so, going down 4-2 at home. In fairness, it might have been an incredibly dramatic 5-4 victory were it not for the heroics of Mitchell in the Annan goal.

DF - Kerr Waddell (Clyde)
Cowdenbeath will face the uncertainty of the play-offs after failing to get the win they required from their trip to Elgin City. What might comfort the Blue Brazil is the fact that, even if they had won, they would have finished bottom of League 2 as both Clyde and Berwick Rangers picked up points. Clyde were able to secure their safety with a commendable draw at promotion-chasing Montrose, as 18-year-old Waddell shone at the heart of the defence.

DF - Marcus Fraser (Ross County)
The defender impressed mightily in Ross County's 1-0 victory over Motherwell, a result that all but ensures County's place in the top flight for another season. Along with team-mate Andrew Davies, Fraser played a key role in keeping a vital clean sheet for his side at Fir Park.

DC - Gary Warren (Inverness CT)
Inverness refuse to go quietly. All but written off by the critics, they dug deep and registered a 2-1 victory over Hamilton Accies to keep their slim hopes of safety alive. Warren was a rock at the heart of the defence, as ICT managed to buck the trend of recent weeks by looking strong and robust across the back four.

MR - Patrick Roberts (Celtic)
The winger scored twice, including an excellent finish for the opener, as Celtic comfortably defeated St Johnstone at Celtic Park. The match occurred a day after it was revealed Roberts had chosen to play for Celtic in the Scottish Cup final over the U20 World Cup with England in South Korea. His performance shows just how big a boost that is.

MC - Paul McGowan (Dundee)
The midfielder was his usual energetic self, contributing in both attack and defence, as Dundee made it two wins out of two under new boss Neil McCann. There's now a four-point gap between the Dens Park side and the relegation play-off spot, as they close in on survival.

MC - Jordon Brown (Peterhead)
Peterhead remain in League 1 by the skin of their teeth following Saturday's 3-2 victory over Alloa Athletic. Twice the visitors took the lead, though each time the hosts came back and won it through a Jordon Brown strike. They still have to navigate through the play-offs to ensure their survival but it's a much brighter prospect than automatic relegation, which befell Stenhousemuir.

ML - Lewis Morgan (St Mirren)
The winger has been in excellent form in 2017 and he continued that with a stirring performance in St Mirren's survival-clinching draw at Easter Road. Morgan tormented the Hibs defence and helped his side earn a 1-1 draw, which was enough to complete the remarkable turnaround under Jack Ross.

FC - Adam Rooney (Aberdeen)
The striker put in a tireless shift to lead the line as Aberdeen secured second place in the Ladbrokes Premiership. Thanks to goals from Rooney and Anthony O'Connor in the 2-1 win at Tynecastle, Aberdeen stayed nine points clear of Rangers with only three games remaining. Though not mathematically impossible, the plus-23 goal differential Aberdeen enjoy over their rivals means the race is as good as over.

FC - Declan McManus (Raith Rovers)
McManus sparked wild scenes in the home end at the conclusion of Raith's 2-1 win over Ayr United on Saturday. Down to 10 men for the majority of the match, Raith fought bravely and got the result they needed with McManus' late goal. Unfortunately for them, St Mirren's 1-1 draw at Easter Road consigned them to the play-offs.

FC - Andy Ryan (Airdrieonians)
Ex-Hamilton Accies striker Ryan has finished the season as the top goalscorer in League 1 after a double against Queen’s Park took his goal tally to 23 for the season. The 3-2 win cemented Airdrie's place in the play-offs and he is this week's star man.